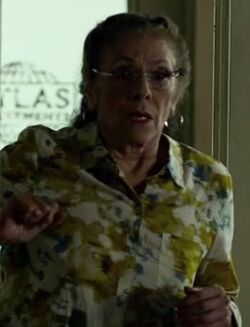 I not take. This my home. We fight, yes?

Elena Cardenas was a senior citizen living in an apartment building in Hell's Kitchen. Its owner, Armad Tully, wanted to kick out their inhabitants and convert the apartments to condominiums. As part of his plan, Tully sent numerous men to damage the apartment building under the claim they were fixing it, and had left without finishing the "renovations" due to having feared their lives.

Bess Mahoney referred Elena to Nelson and Murdock law firm, so they could represent the inhabitants of the building against Tully.[1]

After Nobu forced Wilson Fisk into kicking out the people who lived in Elena's building, Fisk offered them money to move out. However, Foggy Nelson advised her to stay put and not accept Fisk's money.

Fisk, seeking to attract the vigilante's attention and terminate the issues with Nobu at the same time, paid a drugged addict to kill Elena when she was going home. She was later found dead by the police.[2]

Like this? Let us know!
Retrieved from "https://marvel.fandom.com/wiki/Elena_Cardenas_(Earth-199999)?oldid=6073964"
Community content is available under CC-BY-SA unless otherwise noted.