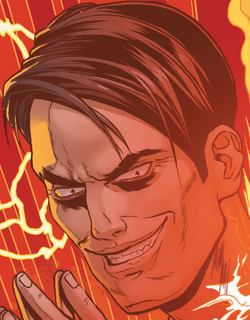 Eli Morrow, is it? You murderous, sadistic, unrepentant Satanist! I've seen the foulest of souls... mortal and immortal alike. But nothing like yours, Morrow. You'll repent for the decades of suffering and torture you brought upon the innocent.

Elias Morrow was a criminal and devil worshiper operating out of East Los Angeles until his brutal demise. His spirit supernaturally inhabited a Dodge Charger that fell into the possession of his nephew, Robbie Reyes. Bonding with one another, Eli and Robbie became the new Ghost Rider. Eli hid his true nature from Robbie and attempted to corrupt him by feeding his lust for vengeance. Robbie eventually learned the truth about Eli and fought to suppress his uncle's influence while operating as the Ghost Rider.[1]

Like this? Let us know!
Retrieved from "https://marvel.fandom.com/wiki/Elias_Morrow_(Earth-616)?oldid=5432819"
Community content is available under CC-BY-SA unless otherwise noted.