Human, originally augmented with MGH, later received blood transfusion from his grandfather, the Black Captain America, turning him into a Super-Soldier

So, when Iron Lad told me he was in trouble--that he needed a Super Soldier--I lied and told him he'd found one. And then I did what I had to do to become one.

Eli Bradley has a family legacy of heroes. After losing the secrets of the Super Soldier Serum when Dr. Erskine died, the United States Army still wanted to produce more Super Soldiers like Steve Rogers.[4] To this end, Col. Walker Price and Dr. Wilfred Nagel took 300 African-American soldiers from Mississippi to experiment upon. Only a handful of men survived the gruesome process, and only one of them survived the covert missions and assignments: Isaiah Bradley,[5] Eli's grandfather.[6] His uncle, Josiah X, continued the family tradition, enlisting in Vietnam War. Later he even took up Isaiah's old Captain America uniform and joined the Crew.[7] Before Isaiah received the Super Soldier Serum, he fathered Sarah Gail, Eli's mother. Because of this Eli was born with no superhuman abilities.[6]

Shortly after the Avengers had disbanded, a younger version of Kang the Conqueror traveled to the present era, with the goal of stopping his future self. Unsuccessful in his attempts to contact the Avengers, he downloaded the The Vision's programming and operating system from the remains of the destroyed Avengers Mansion. Among the Vision files, he found the Avengers Fail-Safe Program. Dubbing himself Iron Lad, he began to seek Avengers recruit in the New York City area. One of these recruits was Josiah X, Eli's uncle. However, Josiah had been out of contact with his family for years. Eli lied to Iron Lad, claiming to be a Super Soldier due to a blood transfusion from his grandfather, and volunteered for Iron Lad's team. Eli then began using the illegal Mutant Growth Hormone (MGH) pills to fabricate superhuman abilities. Wearing a costume very similar to that of Captain America's original sidekick, Bucky, Eli donned a full cowl and a set of five-pointed throwing stars as Patriot, and alongside his new teammates Hulkling, Asgardian and Iron Lad, formed the Young Avengers.[1][8][9][10]

After several weeks of training, the Young Avengers began taking on superhero missions.[10] Their second mission was an attempted to save two hundred guests at St. Patrick's Cathedral when they were taken hostage during Susan Bishop' wedding. Unfortunately, the Young Avengers were only successful in starting a fire and becoming hostages themselves. It was a bridesmaid, Kate Bishop, that actually saved them using one of Patriot's own throwing stars. The Young Avengers were able, however, to escape the scene before the police arrived.[1]

After the attack, at the hospital, Kate was approached by Cassie Lang, daughter of the Avengers' Ant-Man. Together the girls tracked down the Young Avengers at the ruins of the Avengers Mansion, where the girls confronted the Young Avengers and invited themselves onto the team.[11] Not long afterward, the Mansion was attacked by Kang the Conqueror.[12] To join the battle, Kate donned gear from the Mansion such as Mockingbird's Battle Staves and Hawkeye's Bow. She also found the original Captain America's Shield for Patriot.[6] After defeating Kang and saving the world, Kate and Cassie remained on as permanent members.[13]

Captain America and Iron Man ordered the team to disband and refused to train them. However, Kate used some of her family's money and connection to procure a new lair, costumes and weapons for the team.[14] With Iron Lad gone, Patriot and Kate took on the unofficial roles of co-leaders. Patriot and Kate even shared some chemistry and competitiveness. 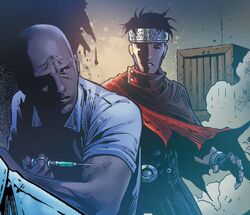 Not long after entering their secret superhero lives, Wiccan discovered Patriot was using MGH to temporarily grant him superhuman powers.[15] After taking MGH, Patriot fought Hyde one-on-one before injecting him with an overdose of MGH and knocking him unconscious. After being forcibly calmed by Wiccan's magics, Eli woke up in recovery at Avengers Tower, with the new Vision taking care of him. After Eli revealed the true origins of his powers, he quit the team.[8]

The other Young Avengers unsuccessfully attempted to get Eli to rejoin them. It wasn't until after Hulkling was captured by the Super-Skrull that Eli rejoin them.[16] During the subsequent battle between the Kree, the Skrulls forces, the Young Avengers and the New Avengers, Patriot used himself to shield Captain America from gunfire and was severely injured.[17] After the battle Captain America rushed to the hospital to give Eli a blood transfusion only to discover "another Captain America", Eli's grandfather, had already given Eli his blood. Since the transfusion, Eli has gained physical attributes and powers of a real Super Soldier.[18]

Along with the rest of his team, Patriot sided with Captain America and the Secret Avengers against the Superhuman Registration Act, which led to the Superhero Civil War.

When the Skrulls invaded Earth, Patriot joined the other Young Avengers and Runaways on the front lines of the battle.[19]

Patriot along with the other Young Avengers helped rescue the fallen from Asgard during the Siege. He and Hawkeye were briefly trapped under some rumble themselves leading to an argument and a kiss.[20]

After Wiccan's powers overloaded and the Avengers decided to keep him under observation, Patriot and the other Young Avengers broke Wiccan out of holding and began the search for the Scarlet Witch. Patriot was extremely hesitant about the plan, but still accompanied the others. Accompanied by Magneto and Quicksilver, the team traveled to Transia and then to Latveria, before discovering a depowered and amnesiac Wanda engaged to Doctor Doom. The rediscovery of Wanda did not go unnoticed though, as the Avengers soon arrived on the scene. A battle with Doom's Doombot army soon broke out and was only stopped by the arrival of Iron Lad.[21]

Iron Lad teleported the Young Avengers and Wanda into the time-stream. They all went into the past and met reanimated Jack of Hearts, who was about to explode. After that Wanda remembered who she is, regained her powers and returned herself, the Young Avengers and Scott Lang into the present.[22] She then finally confirmed that Billy and Tommy are indeed her reincarnated sons.[23]

Wanda's increased powers were revealed to be the result of her gaining a connection to the life force itself. A ritual intended to undo the Decimation was interrupted by Patriot, leading to the powers being transferred to Doctor Doom. He intended to usher the world into a utopia, which he would rule. The Avengers and X-Men teamed up to defeat him, and in the process, Stature was killed by Doom, and the villain escaped after losing his powers when they overloaded.

Iron Lad proposed to save Stature through the Time-stream but Vision refused, ending with both of them battling each other and Iron Lad destroying Vision and then taking off to the time stream, even after Wiccan warned that this is the moment in time where he becomes Kang the Conqueror.

In the aftermath of the battles, Elijah left the team while all the remaining Young Avengers were officially named full-fledged Avengers,[24] and moved to the Midwest.[25] At some point in time, he moved to Arizona to work in voter registration, according to Shaun Lucas.[26] He was present during the marriage of Wiccan and Hulkling after the invasion of the Cotati on Earth [27], as well as their initial elopement in Las Vegas.[28]

Eli was present during Black Panther's return back to Wakanda and helped in the battle with Nicholas Fury Jr. and the second Patriot, Rayshaun Lucas , side by side.[citation needed]

Artificially Enhanced Physiology: Eli was originally born with no superhuman powers. However, after receiving a blood transfusion from his maternal grandfather Isaiah, he became mutated due to exposure to the Super-Soldier Serum[29] which enhanced all of his bodily functions to the peak of human potential, his powers including: