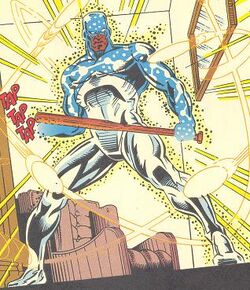 Elijah Jackson was a legendary baseball player in his youth. Later on in life, he contracted a disease that left him a complete vegetable, incapable of even the smallest movements. Taken care of by his daughter Simone, she was forced to sell a piece of his baseball memorabilia every month in order to pay the rent so she could stay home and care for him.

A gang operating nearby picked up on his daughter's pattern, and as she returned home one day, they attacked her. Rifling through her purse and finding little money, they prepared to loot the house, only to be confronted by Elijah Jackson, who had become imbued with the Enigma Force. Beating back the gang with ease, he then turned to his daughter, the Captain Universe costume disappearing. Knowing he only had a few seconds, he told his daughter that no matter what happened, a piece of him still existed in his immobile body and that he loved her. As the last of the Enigma Force left him, he slumped forward, once again completely immobile.[1]

Briefly wielded the powers of the Captain Universe of Earth-616.

Currently a vegetable, incapable of movement.

Wielded the bat he used as a baseball player while possessed by the Enigma Force.

Like this? Let us know!
Retrieved from "https://marvel.fandom.com/wiki/Elijah_Jackson_(Earth-616)?oldid=5543765"
Community content is available under CC-BY-SA unless otherwise noted.