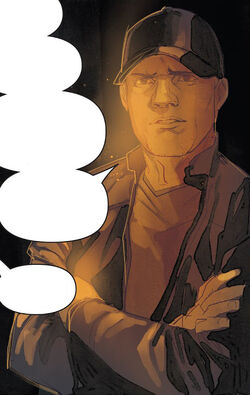 After Agon and Rynda were killed in a tragic accident, a new wise king started rulling Attilan. One day, when he and the two princes, Maximus and Black Bolt, were contemplating a new monument the Alpha Primitives were building, they were attacked with neural inhibitors and the king was rendered unconscious. The princes began fighting to protect the King and, after Black Bolt's voice blacked every attacker out,[1] Maximus killed Dkamas, the leader of the Uprising.[2]

Later, the corrupt viceroy Kadlec the Seeker led the king to suspect the young princes were conspiring to steal the throne, and Elisha, one of the Alpha Primitives, convinced the two brothers that the king was plotting their demise, due to being humiliated when they saved his life. When Kadlec branded Medusa as a traitor, she and the two brothers escaped with Elisha and Lockjaw to New York City.[1]

In New York, they were introduced to Ben Wittman, the scientist who designed the inhibitors used in the Uprising,[2] and he provided the princes with some tech that allowed them to better control their powers, including enabling Black Bolt to speak. Medusa, on the other hand, stayed with Elisha and Lockjaw while the princes were training.[3]

Like this? Let us know!
Retrieved from "https://marvel.fandom.com/wiki/Elisha_(Alpha_Primitive)_(Earth-616)?oldid=4203540"
Community content is available under CC-BY-SA unless otherwise noted.