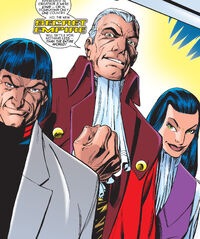 Origin
Founders of the Royalist/Imperial Forces

The Elite were a group dedicated to overthrowing the government and placing their selected "Elite" class as the ruling body. Initially, the Elite used Mad-Bombs to send groups and cities into mad frenzies. Their ultimate goal was to detonate their "Big Daddy" Mad-Bomb, which would catalyst the entire continental United States into rioting acts of destruction[1]. After this chaos, the Elite would employ their Royalist Forces and emerge as the ruling class over the "low-born". The Elite's plot was ultimately defeated by Captain America and the Falcon[2]

The Elite initially used Royalist forces as their militia. These soldiers recognized the Elite as their superiors, but were assured of reward when the Elite would eventually control the country. After their initial defeat, the Elite used Imperial Forces of super-powered entities as a brigade to enforce their policies[3].

More recently, founding members of the Elite connected with the Secret Empire.

Retrieved from "https://marvel.fandom.com/wiki/Elite_(Imperial_Forces)_(Earth-616)?oldid=5546400"
Community content is available under CC-BY-SA unless otherwise noted.