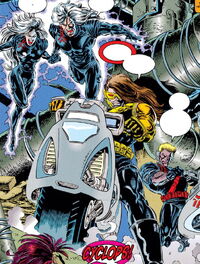 The Elite Mutant Force was a team of mutants assembled by Sinister to police over his Breeding Pens and serve Apocalypse. Those who did not accept Sinister's offer were captured and used as test subjects for Sinister and Dark Beast's experiments. The heads of the EMF were the Summers brothers Cyclops and Havok. Havok would covet the position that his brother had as head of the EMF.

In their first recorded appearance, the EMF would be sent out to track down Christopher Summers, the father of Cyclops and Havok who had returned to Earth after years of being in space. Summers was infected with a Brood embryo and risked infesting the planet with Brood hatchlings. Members Emplate would be slain and his twin sisters The Monets put in a catatonic state in their hunt before Cyclops would be forced to slay his own father.[1]

Twilight of the Age of Apocalypse

In modern times with the passing of the Kelly Pact, Cyclops would become critical of the Dark Beast's illegal experiments, this in the light of the fact that Sinister would be planning on leaving.[2] Shortly thereafter, the EMF would be called out to capture a number of escaped mutants that broke out of the breeding pens. Havok, Northstar, Aurora and Cyclops would be dispatched to stop them. The others would slay the escapees, much to Cyclops's upset. Their remains would be turned over to the Dark Beast to have their bodies melted down. When Cannonball and Amazon would use brutal force to quell an uprising, Cyclops would order them to stand down. Later, the Bedlam Brothers and Havok would go for some relaxation at the Heaven nightclub. Their night would be interrupted by human terrorist Henry Gyrich, whom the Bedlam Brothers would defeat. Havok would leave to have a private moment with Scarlett McKenzie the lounge singer whom he was secretly having an affair with. Later Cyclops would have the Bedlam Brothers help open break into Sinister's lab when he was barred access to find that Sinister had trashed his lab.[3]

Cyclops began secretly releasing prisoners from the slave pens, using a scrambler to mask his appearance on the security monitors. When he was witnessed by Polaris would witness his escape attempt but be left behind. Her mind fractured, she would think it was Magneto a man she believed to be her father. When the EMF attempted to interrogate her would yield no results, she would be turned over to the Dark Beast for memory extraction. Havok would continue to see Scarlett, unaware that she was a spy who was reporting whatever he told her to the Human High Council. When the Beast was to attempt to use a physical extraction, Cyclops would stop him. He would later secretly smuggler her out, knocking out Northstar and Aurora in the process. Cyclops would turn Polaris over to refugee smuggler Valerie Cooper unaware that his brother was spying on him.[4]

When a number of the Dark Beast's mutated animals would break out of their pens, Cyclops and Havok would quell the violence, and Havok would skirt around the truth he knew about his brother, waiting for the right time to oust him as leader of the EMF. Meanwhile, the Bedlam Brothers would learn that Scarlett was a spy, and arrest her just after she learned that she was pregnant with Havok's child. When Jean Grey would infiltrate Apocalypse's citadel, she would be captured by Havok and brought to the Dark Beast. When Cyclops would refuse to execute her, Havok, Cannonball and Amazon would attack him and turn him over to the Dark Beast before going to slay all those in the Slave Pens. Cyclops and Jean however would break free.[5]

As Cyclops and Jean would free those in the slave pens and try to lead them to safety, the other members of the EMF would attempt to destroy them. The Bedlam Brothers, uneasy with the idea of slaying all the harmless slaves would defect and prevent Cannonball and Amazon from capturing Cyclops and Jean. They would flee from the scene. Havok would attempt to stop them however, he would be beaten into submission and left for dead, however he would survive the attack and follow after his brother.[6]

Havok would track them to outskirts of Manhattan where he would kill Jean and attempt to slay his brother before being killed by Weapon X.[7]

The Fall of Apocalypse

Following the downfall of Apocalypse, the X-Men would help rebuild the United States and restore the government. All those who willingly aided Apocalypse would be sought out as war criminals.

Retrieved from "https://marvel.fandom.com/wiki/Elite_Mutant_Force_(Earth-295)?oldid=5546403"
Community content is available under CC-BY-SA unless otherwise noted.