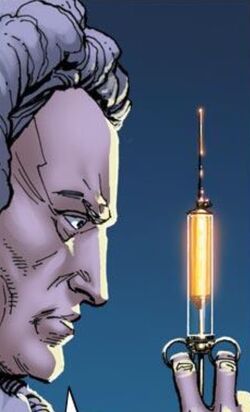 The Elixir of Life is a magical serum that belonged to Candra. She used the Elixir to greatly extend the normal lifespans of her servants (like Mercy LeBeau), and perhaps also to extend her own life.[3]

Working with the Brotherhood of the Shield, Sir Isaac Newton discovered the "Secret Alchemy," which allowed him to create the Elixir of Life. Newton referred to this formula by different names depending on its potency: the Forever Compound and the secondary substance the Infinity Formula. Slowly doling this out potion allowed Newton to buy loyalty from the other members of the Brotherhood.[1]

Fu Manchu used the "Elixir Vitae" which was created centuries earlier by his ancestor Shaka Kharn.[2] He gave at least two other individuals his elixir, his daughter Cursed Lotus and his loyal agent Ducharme.[4][5]

Retrieved from "https://marvel.fandom.com/wiki/Elixir_of_Life?oldid=6039088"
Community content is available under CC-BY-SA unless otherwise noted.