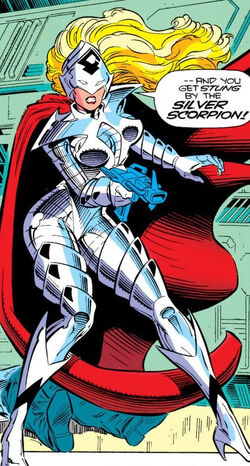 Betty Barstow worked as a secretary for Dan Hurley, a private investigator. While attending a costume party, Betty had to stop a gang of counterfeiters. They operated Woodline Cemetery and frightened it's caretaker Greggs Hansen. She was amused that her employer was unaware that she was the Silver Scorpion.[1] Later, she exposed Effendi Mohammad a supposed medium as con-man Eddie Lorey.[2] Soon after she foiled a plot to unleash an aging plague.[3]

During her adventures she met and befriended Professor Carson. Carson was working on a variety of weapons technologies for the war effort. Betty was the model for a prototype suit of armor he was designing.

In June of 1942, the Thin Man contacted Betty to let her know that Battle-Axis was planning to rob Professor Carson's lab. Dan Hurley overheard her speaking with Thin Man and insisted he join her. When the Battle-Axis broke into the lab, they killed Carson and Hurley. Barstow was injured but donned the armor Carson had been developing, joining Captain America and Miss America to attack the Axis. Dan was killed in the altercation and the members of Battle-Axis escaped.[4] She assisted the group in preventing Battle-Axis from destroying San Andres Fault causing the American west coast from plunging into the Pacific Ocean.[5]

In 1943, the Silver Scorpion (apparently abandoning her armor) was among a number of heroes who were slain by the Cosmic Cube wielding Red Skull and impaled on a massive wall.[6] However, the Cube was recovered by Private Paul Anselm who resurrected all the slain heroes who aided the combined efforts of the Invaders and the time displaced New Avengers and Might Avengers. When the Skull was defeated the heroes used the Cube to wipe out the Silver Scorpion's memories of the event to preserve history.[7]

Betty was given an honorary membership in the Invaders but remained based in California until she became a founding member of the V-Battalion.

She was still active with V-Battalion but was suffering from the early stages of Alzheimer's disease.[8]

Barstow is a skilled fighter experienced in jiu-jitsu and in detective work.

Alzheimer Disease at its early stages.[8]

The Silver Scorpion armor provided with protection against harm and fires the "scorpion sting" from wrist-mounted blasters.

Like this? Let us know!
Retrieved from "https://marvel.fandom.com/wiki/Elizabeth_Barstow_(Earth-616)?oldid=5519505"
Community content is available under CC-BY-SA unless otherwise noted.