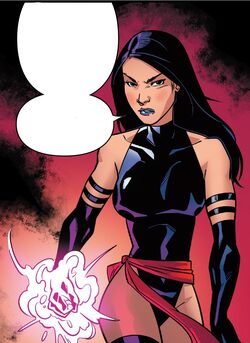 Psylocke was a lone warrior who practiced theft with a cause (a la Robin Hood). She had the mutant ability to fire psychic knives to incapacitating her opponents from a distance.

She came into direct conflict with Archangel and later with Sabretooth and Mystique. She referred to her brother fighting to help mutants, but did not name him as Captain Britian.[1]

Seemingly those of the Betsy Braddock of Earth-616.

Psylocke has a crush on Cyclops.[citation needed]

Like this? Let us know!
Retrieved from "https://marvel.fandom.com/wiki/Elizabeth_Braddock_(Earth-92131)?oldid=6060288"
Community content is available under CC-BY-SA unless otherwise noted.