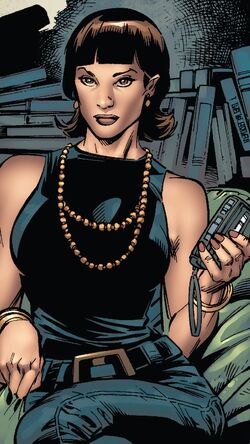 You really don't get it, do you. You act like Peter Parker is the disguise that Spider-Man hides behind. He's not. He's Peter Parker wearing a costume. And Peter is good, decent, caring man, and always has been.

Betty dropped out of high school in Philadelphia, Pennsylvania[4] in order to work and financially help her home.[5] She became a secretary of the Daily Bugle publisher J. Jonah Jameson. There she met Peter Parker when he became a freelance photographer for the Daily Bugle.[4] After they had been attacked by the Vulture.[6] Peter had already noticed his attraction to Betty, and was impressed when she stood up to J. Jonah Jameson over publishing slandering articles against Spider-Man. They began dating shortly afterwards, when Betty was impressed by Parker's kindness when taking care of his ill Aunt May.[7]

Her secretarial job at the Bugle was taken to help her brother attorney Bennett Brant pay back his gambling debts[8][9] which he had acquired trying to pay for their Mother's medical bills. Bennett had become friendly with Betty's then-boyfriend named Gordon Savinski. Gordon was into many illegal activities and Bennett eventually took on a gambling debt that he couldn't pay back to a gangster named Blackie Gaxton. Blackie's thugs looking for Bennett came to the Brant family home, and Betty's mother got "in the way" and was violently knocked into a coffee table, resulting in permanent brain damage.

With the help of Doctor Octopus, Blackie Gaxton kidnapped both Bennett and Betty as insurance against anyone preventing him leaving the country. Bennett was double-crossed when Gaxton refused to free him of his debts and was fatally shot during a melee between Gaxton's gang, Doctor Octopus and Spider-Man. At first, Betty blamed Spider-Man for the death of her brother and told Spider-Man that she never wanted to see him again, but she realized later on that she was wrong and that he had only been trying to help[8]. However the blossoming romance between Betty and Peter continued but was cut short, when Betty feared that Peter cared more for his classmate Liz Allan.[10] This misunderstanding led to their relationship finally coming to an end.[11]

Soon after Peter and Betty's break up she started dating fellow Daily Bugle employee reporter Ned Leeds.[12] Even though he soon left for Europe, they remained in contact, writing each other regularly.[13] Upon his return, they began dating again,[14] and Leeds eventually proposed to Betty. There were signs that Betty still loved Peter and Peter did his best to alienate her for her own good.[15] She eventually accepted Leeds' marriage proposal.

After their engagement J. Jonah Jameson threw an engagement party at his penthouse apartment and their wedding soon followed. Their Wedding Day was not all smooth sailing as a costumed criminal named Mirage decided to rob all the guests at the top weddings on that day. Fortunately Spider-Man intervened and Mirage was easily captured. They were married with Mary Jane Watson serving as Betty's maid of honor.[16]

Soon after their wedding Jameson sent both Betty and Ned off to Paris, France on an all expenses paid working honeymoon. Betty soon began to notice the change in Ned as he became consumed by work. She felt like a total outsider while there, not even able to speak French and while Ned covered an insurrection in Cyprus she flew back to New York hoped to the consoling arms of Peter.[17] After discovering Betty's disappearance Ned quickly returned to New York and confronted both Peter and Betty. Ned told Peter to take his hands off his wife and punched him in the jaw and tried to force Peter never to see her again. Having been jilted by Mary Jane Watson, Peter then said that he never wanted to see either of them again and that he was only interested in Betty to make Mary Jane jealous using these comments in the hope that this would bring Ned and Betty back together.[18]

Ned's investigative reporting brought an incredible strain on the Leeds' marriage. Following leads on the mysterious new villain (who had styled himself on the Green Goblin) named Hobgoblin, Leeds was captured and hypnotized to think that he was the Hobgoblin. During this period Betty turned to her friend Flash Thompson but he too was framed by the real Hobgoblin and in the process Betty saw Ned dressed as the Hobgoblin threatening Flash. Her mind already fragile was pushed over the edge. Meanwhile a mercenary named Jason Macendale asked the Foreigner for information on who the Hobgoblin was and was given Leeds' name. When Ned followed an espionage story to Berlin, under hypnosis he dressed himself as the Hobgoblin and was assassinated by the Foreigner's men. Macendale, after thinking the original Hobgoblin was dead, would later adopt the identity of the Hobgoblin for himself.

Betty suffered a complete mental breakdown after the news of Ned's death reached her and suffered denial believing him to still be alive. In her state a young recruiter from the Cult of Love was able to persuade her to join their faction under a leader called the Teacher where she was programmed in their ways. The Teacher turned out to be nothing more than a con artist conning people out of their possessions. Fortunately Flash and Spider-Man figured this out and saved Betty, though she lost everything she owned and had to take up residence with Flash Thompson.[19]

After these difficult times she returned to work at the Daily Bugle as a secretary under the city editor Kate Cushing.

After Jonah sent Betty to take a deep cover role as a secretary in an organisation suspected of having terrorist ties, Betty realised she had an aptitude for investigative reporting.[20] Tired of being the victim, she took self defense training and threw herself into her new role. Shocked by this change in Betty and concerned about the risks she was taking, Peter followed her as Spider-man while she investigated the Foreigner's role in Ned's death[21], but when Betty learned the truth, Peter was forced to confirm that Ned had been died in the guise of the Hobgoblin.

Betty would later work with Robbie Robertson to expose the dangerous experiments being conducted by Project: Sandstorm, despite the involvement of Jameson's wife Marla Madison in the project.[22][23] She would also lead the investigation into the death of Bugle photographer Lance Bannon at the hands of the FACADE armor [24], though the mystery of who was wearing the armour would never be resolved.

After being assigned to write a review of the Food Factory restaurant chain, Betty was surprised to find herself approached by an unidentified informant who was shot down in front of her without explanation.[25] Discovering that the man was Jimmy Fude, co-owner of the Food Factory, she realised there was a story there after all.[26] While investigating, Betty was taken hostage by Jimmy's surviving brother Tommy, who feared his brother had already shared accounts with Betty which would prove that he (Tommy) had funded their business only by making a deal with mob to use it as a money-laundering operation. Back at the Daily Bugle, her colleagues noted her disappearance and her ransacked apartment and launched their own investigation, fearing they might soon be publishing her obituary. Realising the cat was out of the bag, Tommy committed suicide, despite Betty's best attempts to talk him down. Undaunted, Betty made sure the full story made front page news the next day.[27]

After Jason Macendale's trial, the story that Ned Leeds was the original Hobgoblin was leaked to the press.[28] While Betty was hounded by reporters, the real first Hobgoblin broke into Macendale's prison to assassinate him, in the process being caught on camera admitting that Ned had been no more than a decoy. Betty worked with Peter, MJ and Flash to piece together the case, then announced her initial findings on the news in attempt to draw the real culprit out, claiming to have found notes left by Ned which might implicate the real villain.[29] This worked – Betty was captured by the real Hobgoblin, who admitted that the brainwashing he used on Ned had been the real source of the erratic behaviour which had ruined their marriage. Betty was able to draw Spider-man to his hideout using a spider-tracer hidden in her tape recorder, and Spidey unmasked Roderick Kingsley as the true Hobgoblin during the fight and handed him over to the police. With her husband's name cleared, Betty published the full story, finally able to put the matter to rest.[30]

Betty became a reporter under Dexter Bennett and became the only one of the old circle to remain working at the Daily Bugle. However, this decision had alienated her from most of her friends. Robbie was disappointed with her continued employment, May Parker was unhappy with her because of her involvement in trying to find a scandal story against her boss Martin Li, and Harry Osborn was angry with her because the Daily Bugle was trying to discredit his girlfriend's father in the mayoral election. In fact, only Peter showed up at her birthday, because he was the only one of her friends that was not angry with her, making Betty realize that Peter is truly her best friend.[33]

During one of Spider-Man's adventures, the new Jackal used cloning technology to bring back to life numerous of the wall-crawler's allies, including Ned, who lived in secrecy at the Jackal's base.[34] When Jackal's clones started decaying near the villain's fall,[34] Ned managed to contact the outside world and left a message in Betty's voicemail, ending it cryptically uttering the words "Blood Creek." Even though he ended up not dying, being part of a small portions of the clones whose decay Spider-Man managed to stop in time, Ned decided to slip under the radar and fake his second death.

While reeling from her husband's message, Betty decided to investigate into his final words. Betty eventually discovered Ned's words referred to a case he was working on regarding the Revolutionary War's Battle of Blood Creek, which had had a statue erected commemorating it in City Hall. From Dr. Wayne Childs, a historian and one of Ned's sources, Betty learned that there actually had been no such conflict. Following Dr. Childs' kidnapping at the hands of the Enforcers, Betty and Spider-Man sought Glory Grant's help to research City Hall's files on the statue, and learned it had been commissioned for millions more than a simple statue should've cost.

After learning from another of Ned's contacts, Mr. Prescott, that the Blood Creek statue doubled as a powerful bomb, both he and Betty were captured and taken to the underground headquarters of long-hidden Maggia leader Ernesto Karnelli, who was preparing to make use of the statue's true function since the truth was close to being uncovered. Spider-Man managed to rescue Betty and pursue Karnelli, who was trying to get out of the bomb's radius. After getting back to the surface, Betty tried to get the City Hall evacuated. She stumbled upon Karnelli's butler Renaldo fighting off a vagabond, who was trying to stop Renaldo from accessing the manual controls of the bomb below the statue's pedestal. Unbeknownst to Betty, the homeless man was actually Ned in disguise. Once both Karnelli and his butler were stopped, Betty wrote an exposé with Ned's name attached to it. The statue was dismantled, and in its location was placed a plaque in Ned's honor. Ned observed when Betty celebrated the resolution of the case with Glory and Peter, and walked away without being noticed.[5]

Like this? Let us know!
Retrieved from "https://marvel.fandom.com/wiki/Elizabeth_Brant_(Earth-616)?oldid=6131573"
Community content is available under CC-BY-SA unless otherwise noted.