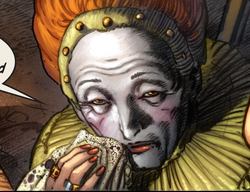 Queen Elizabeth I of England had a stable reign of nearly 44 years. She was concerned about the strange anomalies that were happening around the world, and tasked Doctor Stephen Strange to solve that mystery. She also had her spymaster Sir Nicholas Fury allocate a powerful artifact from their Templar ally Donal and protect it from other factions who would misuse it.[citation needed]

The Queen arranged Virginia Dare's summons to her court, where Virginia acted as ambassador from Roanoke in requesting Elizabeth for colonial support. Elizabeth became the third target of assassination by Count Otto von Doom when he sent a mechanical gift which released poison gas, killing the Queen.[citation needed]

Like this? Let us know!
Retrieved from "https://marvel.fandom.com/wiki/Elizabeth_Tudor_(Earth-311)?oldid=5268286"
Community content is available under CC-BY-SA unless otherwise noted.