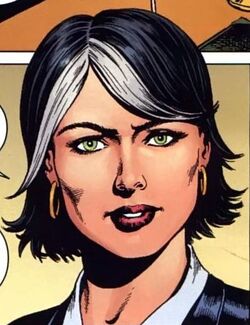 Elizabeth Zogolowski is the daughter of Philo Zogolowski, the creator of the robot known as Electro which was active during World War II. When her father died, ownership of his company, Zog Industries, passed to Elizabeth, a company which she still owned up to the present day.[1]

When the cryogenically frozen members of the Twelve were discovered in a bunker beneath Berlin, they also found Zog's robotic creation. The American military tried to claim Electro under existing salvage laws, but Ms. Zogolowski claimed that she owned the robot as it was Zog Industries property.[1]

While the matter did go to court, Ms. Zogolowski was granted temporary ownership and was soon seen at the Twelve's mansion, claiming the inert robot. She revealed that she wanted to preserve the robot as it represented her father's life work, while the government simply wanted to tear it apart to learn the secrets of its telepathic controlling system. In order to earn money for her legal battle, Ms. Zogolowski entertained the Blue Blade's idea of putting him on his television show to help boost ratings.[2]

Ms. Zogolowski later leased the Electro robot to the government for use as an anti-terrorism weapon, and it was operated by the Laughing Mask in exchange for his freedom after he had been convicted of the murder of a mobster back in the 1940s.[5]

Like this? Let us know!
Retrieved from "https://marvel.fandom.com/wiki/Elizabeth_Zogolowski_(Earth-616)?oldid=5122769"
Community content is available under CC-BY-SA unless otherwise noted.