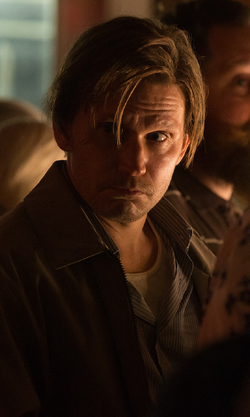 He was one of 16 irish gang members who met at the Burren Club when 15 of them were massacred in an all-out firefight. As the only survivor, he was seen as a traitor or a rat among his co-workers and went on the run.

Grotto sought the help of Nelson and Murdock at Josie's, hoping to have them represent him while he went to the DA for witness protection in exchange for his knowledge.

Daredevil saved Grotto after he and Karen narrowly escaped the assailant who attempted to finish the job at the hospital.[2]

Like this? Let us know!
Retrieved from "https://marvel.fandom.com/wiki/Elliot_Grote_(Earth-199999)?oldid=5541791"
Community content is available under CC-BY-SA unless otherwise noted.