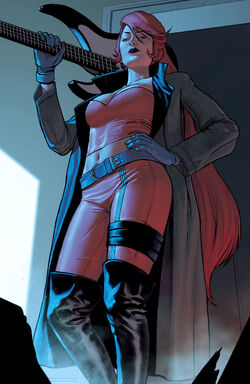 Elsa Bloodstone is the daughter of Elise and the immortal monster hunter, Ulysses Bloodstone. Born in Boston, Massachusetts, she was actually raised in England and saw Europe as home.[5][6]

Ulysses was a strict parent, to say the least; as a rite of passage, Bloodstone had his daughter fight the Blight Beast when she was only a baby.[7] He also tried to remove her weakness as a child by throwing her to a horde of Great White Sharks off the coast of South Africa.[8] For her first kill, her father made her fight a Qlippoth, but she took 10 seconds too long and got its blood all over her head. Elise wanted to shave Elsa's head to remove it, but Ulysses had ordered Elsa to let it remain there and infect her scalp as a sign of her inadequacy, so Elsa claiming the abuse he committed was at her hand.[9]

When Ulysses' age was finally catching up with him, he begged Elsa to end his life, but she refused.[10] After he died, she settled in his former family estate, in Boston, Massachusetts and decided to start a Monster Hunting career as well, using the powers of Bloodstone Choker whenever the situation demanded.[9][11][12]

At some point, Elsa Bloodstone joined Nextwave in their fight against The Beyond Corporation.[2]

After her exploits with Nextwave, Elsa registered to the US government by joining the Initiative,50-State Initiative,[13] and returned to her monster-hunting ways. She hunted down the Children of Goram to Prague where she was impregnated by one of the monsters, but the Bloodgem killed the offspring while it was inside her and she puked it up. She killed all the monsters and vowed to kill all monsters before she died (also vowing to be the last of the Bloodstone line, never to have a child).[14]

In between her monster hunting, Elsa became a staff member of the Braddock Academy.[15]

When a being known as the Dreaming Maiden started dreaming again, Elsa was drawn to track her down, due to her father being a member of the Covenant, a group that tried to kill the Dreaming Maiden years ago but did not succeed in doing so, due to deception by the assassin they hired, Wolverine. This led her to search out the Maiden to finish her father's work which brought her into contact with Wolverine in the present day. It also brought her into direct confrontation with Covenant members Murderous Lion, Jefferson Chambers, Wyatt Crowley, and Menace. After the Maiden had been killed, Vanessa Baker, another previous member of the Covenant, brought her and the other members together to "get back to business".[16]

Shortly after her time with the Defenders,[17] Deadpool and Elektra broke into Bloodstone Manor to steal Elsa's Bloodstone Choker. She caught them in the act and managed to lock both in a dungeon with the help of Living Mummy and Frankenstein's Monster, but they managed to escape and take the Bloodstone with them.

Furious the "White Stripes" had just robbed her, she tracked them down to get her belongings back, but ended up helping them defeat a Dr. Strange impersonator instead. In the end, her Bloodstone was returned to her, but W.A.N.D. director Pandora Peters thought it was best for everyone involved to forget the incident and made Elsa and the Thunderbolts remember the events of that day as a nice Shawarma lunch together.[12]

In the wake of the World War Hate, Doctor Doom's personality was inverted, along with that of numerous heroes and villains. After having seen the errors of his ways, Doom planned to redeem himself.[citation needed]

After the Avengers disappeared, having being captured by the inverted and evil Avengers Unity Division, Doom tasked Valeria Richards with the mission to assemble a group of certainly available heroes, including Elsa, each having specific skills that could be utilized.[citation needed]

The new Avengers assembled in Doctor Doom's Castle and jumped into action when the now-evil Scarlet Witch arrived to Latveria to have revenge on Doom.[citation needed]

The Avengers fought the Scarlet Witch and saved villagers trapped in the crossfire. 3-D Man managed to get hold of the Witch and take her to a machine Doctor Doom had created to specifically canalize her abilities. Soon after being put into the machine, the Scarlet Witch escaped and set out to find Doom, leaving the Avengers behind. After condensing a portion of Scarlet Witch's powers into the device, Valeria informed the heroes their job was done.[18]

After the collapse of the Multiverse, Elsa found herself on Battleworld, believing to have lived there her entire life and now being a commander of the Hel-Rangers who guarded the Shield. During an attack on the Shield by a Zombie horde, Elsa was teleported deep into the Deadlands by Azazel. There, she found a small girl with no idea who she was or how she'd gotten there. Naming the girl 'Shuttup' and saving her from a zombified Juggernaut, the pair decided to travel together, unknowingly being followed by a mysterious figure.[19]

After numerous attacks by Zombies, the pair eventually made it to the southern tip of Battleworld, where they were confronted by the unknown figure, who was revealed to be an alternate version of Ulysses Bloodstone. Ulysses was trying to obtain all versions of the Bloodstone and all members of the Bloodstone family were inexplicably drawn to this location due to this desire. After Ulysses bit off Elsa's forearm and seized Shuttup, Elsa finally realized the little girl was a personification of her lost childhood and everything Ulysses had deprived her of. While sharing this realization, she got Ulysses distracted, allowing Shuttup to seize her gun and kill him. She then absorbed the bloodstones he'd captured and merged with Shuttup, while restoring her hand. Using the power now within her grasp, she destroyed the zombie horde and restored Ulysses back to life fully healed in hopes of giving him a second chance.[9]

After the reconstitution of the Multiverse, Elsa resumed her regular activities, and at some point she traveled to Peru, where she found a prophecy that told of the Monster King all the monsters fear.[20] She then discovered that a kid named Kei Kawade was somehow responsible for the invasion and paid him a visit, then took him to the Inhumans to examine his abilities.[21] When another wave of monsters arrived, Elsa and other heroes protected Kei from monsters attacking the S.H.I.E.L.D. base Triskelion off the coast of New York City.[22]

During a monster hunt in Prague, Elsa came across a Bone Beast. She fought the creature using her Bloodstone hand, but it got infected by the beast, causing Elsa to slowly begin dying.[23]

Later, Blaylock contacted Elsa to kill the newly appointed Monster King of Staten Island and force all the monsters out of there, but she declined the job, forcing him to hire Deadpool instead. Despite her initial refusal, Elsa eventually reconsidered the offer and tried to murder the king, but Deadpool was already on scene and actually managed to kill the creature, thus becoming the new monarch, in accordance with an old Monster Law.[24]

When King Deadpool was then attacked by Kraven the Hunter, Elsa, seeing him being overwhelmed by the hunter, shot Deadpool with a bullet that temporarily transported him to the Bone Beasts' pocket dimension, thus making Kraven flee the scene and allowing Deadpool and the other Monsters to come up with a strategy.[25][23]

After Kraven's defeat, Elsa confessed to Deadpool that she believed he could make a good King and, after some initial resistance on Wade's side, Elsa even began assisting Deadpool during his reign.[26]

According to Elsa, she had some of the Bloodgem power via a genetic inheritance from her father, and it was present in her blood, indicating that she didn't gain powers solely via the Bloodstone Choker, but was born with at least some of her power already. She has an unspecified level of super strength, has enhanced regenerative powers, she has demonstrated immunity to vampire bites, her blood will render a vampire human if consumed as the original Bloodgem fragment itself was an anathema to vampires.[27]

Like this? Let us know!
Retrieved from "https://marvel.fandom.com/wiki/Elsa_Bloodstone_(Earth-616)?oldid=6316804"
Community content is available under CC-BY-SA unless otherwise noted.