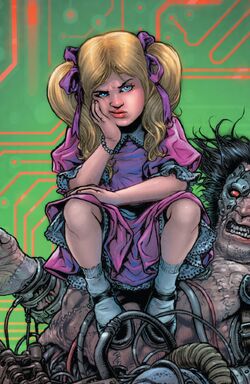 Elsie Dee was an android created by Donald Pierce to kill Wolverine. She was designed to self-destruct when near Wolverine. However, since she was given a maximum logic system, she refused to sacrifice herself and reprogrammed Albert. After Wolverine saved her, she became his ally.[2]

Elsie-Dee still had a self-destruct program in her and so went to Madripoor where Pierce resided to have him remove the program. Instead, Pierce took her apart and sold different pieces to criminal gangs all over Madripoor. When Albert learned what Pierce did, her went across Madripoor recovering Elsie-Dee's parts and putting her back together again. However, Albert's actions had antagonized Pierce and the Reavers as well the criminal gangs who formerly owned Elsie-Dee's parts who all vowed to take him down.[3]

Albert and Elsie-Dee fought through two gangs of criminals before being confronted by the Yakuza, led by the crimeboss Kimura. After fighting off Kimura's henchmen, Kimura declared that he wanted to fight the androids by himself to avenge Yakuza honor. A fight was avoided when Elsie-Dee told Kimura that she erased his bookkeeping data she had in her memory. No longer needing to fight the androids, Kimura offered the androids safe passage to Macao but only if Albert agreed to lose one of his fingers as a form of penance. Albert agreed, and Kimura shipped the androids in a box to Macao, allowing them to bypass Pierce and his men who had staked out the Madripoor International Airport to destroy them.[4]

Robotic Body: Elsie Dee was constructed out of C-4 and other forms of explosives as a living bomb. Her self-destruct was originally rigged to a proximity timer set off by Wolverine's presence. Later on, she had a new, non-explosive body constructed in order to go on living.

Like this? Let us know!
Retrieved from "https://marvel.fandom.com/wiki/Elsie-Dee_(Earth-616)?oldid=6467338"
Community content is available under CC-BY-SA unless otherwise noted.