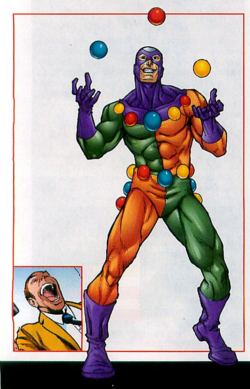 Elton Healey and his brother Alvin were born in Reno, Nevada. Being young, both Elton and Alvin stood out when juggling. They called the attention of a Charles Last, who wanted to recruit them for a new gang of costumed criminals the Death-Throws.[1]

Under the leadership of Last, would be at the same time costumed mercenaries and jugglers. They would take advantage of their juggling skills and use throwing weapons. Last became the Ringleader. Elton adopted the name of Oddball due to his loony nature, and his tenpin-throwing brother would be know as the Tenpin. The fourth member of the team was Knicknack.[1]

Although the Death-Throws valued teamwork more than other villain groups, Oddball suddenly broke up with the Death-Throws for unknown reasons. He began working solo, or at least without his usual partners. As a costumed mercenary, Oddball was hired by Crossfire, who wanted to kidnap Hawkeye to use him in a test of his hypnotic ultrasounds. Crossfire also hired to other costumed mercenaries, the Silencer and Bombshell, for this job.[2]Oddball and Bombshell approached Hawkeye and his partner Mockingbird, and attacked them by surprise. Oddball harassed Hawkeye with his burning-ball juggling while Bombshell was taking care of Mockingbird. Although the heroes were more skilled, the villains managed to knock both of them down, and took them to Crossfire's headquarters at Cross Technologies. Oddball was impressed by Bombshell's skill for the craft, and talked her into joining the Death-Throws. Hawkeye and Mockingbird escaped from Crossfire's trap, destroyed his ultrasound machine and captured Crossfire. Oddball and Bombshell would have been arrested too, but they were rescued by Tenpin, who was looking for his missing brother.[1]

Crossfire contacted the Death-Throws from jail. He wanted the jugglers to release him, and agreed to pay them when he was freed. The Ringleader accepted the deal, and Oddball and the other Death-Throws worked together to free Crossfire. However, once they had taken Crossfire to their own HQ, they discovered that Crossfire was broke! His assets had been impounded and he had lost any useful link with Cross Technological Enterprises. The Death-Throws decided to use Crossfire as a bait to attract Hawkeye and Captain America to a trap, but those two Avengers defeated all of the Death-Throws. Oddball and his partners went to jail.[3]

Oddball is one of the regulars at the Bar With No Name.[7]

Later, Oddball was approached by Doctor Octopus, who was forming a new incarnation of the Masters of Evil. Their goal was stealing technology from the Avengers HQ, which was under little watch at the time (due to an explosion in the Four Freedoms Plaza's top floors). The Masters of Evil attacked and found a defense in form of support crew and time-traveling heroes Guardians of the Galaxy. Oddball and most of the other Masters were defeated, although Octopus and three of his lackeys reached the enemy base. Octopus would be soon expelled, nevertheless.[8]

Oddball ambushed Hawkeye disguised as a police officer when he was showing Avengers young recruits Justice and Firestar around a prison. He released the inmates in an attempt to swamp them however they are able to stop the riot. [11]

Some time later, Oddball improved his own gear and decided to test in the bloody annual competition of Madripoor, the Bloodsport, which was at the time organized by Viper. In the first round, he was confronted in a one-on-one match with sword-wielding Headhunter. Oddball was confident of his new gear and wanted to use the Bloodsport as a means to obtain some prestige. However, the Headhunter stabbed him with a shriek, killing Oddball in front of a lot of witnesses.[12]

Oddball performs his juggling with hollow spheres, most of them customized as weapons such as:

Like this? Let us know!
Retrieved from "https://marvel.fandom.com/wiki/Elton_Healey_(Earth-616)?oldid=5471413"
Community content is available under CC-BY-SA unless otherwise noted.