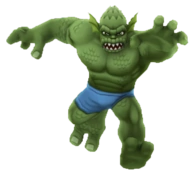 Abomination is featured in the Super Hero Squad Show voiced by Steven Blum. He is a member of Doctor Doom's Lethal Legion and along with M.O.D.O.K. acts as the group's comic relief and the strongest villain. He has the same intellect as Hulk and the same strength. Sometimes he helps the heroes without even realizing it.

Seemingly those of Emil Blonsky of Earth-616.

Like this? Let us know!
Retrieved from "https://marvel.fandom.com/wiki/Emil_Blonsky_(Earth-91119)?oldid=5839248"
Community content is available under CC-BY-SA unless otherwise noted.