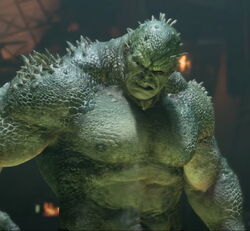 Maybe [you're] not an ape after all- that's too kind a word for a grotesque thing like you!

At some point in time, Emil Blonsky volunteered for AIM’s gamma radiation tests, which irreversibly turned him into a gamma creature dubbed "Abomination".

Blonsky attempted to stop Kamala Khan from retrieving JARVIS from an old Avengers facility, but Hulk intervened. The two fought, but Hulk ultimately emerged victorious, savagely beating Blonsky into unconsciousness with a large piece of machinery, and Kamala and Banner were able to escape with JARVIS.

After Tony Stark joined up with Kamala Khan and Bruce Banner AIM sent their Synthoids after them, which failed. Blonksy expressed aggravation at this, claiming that AIM should have let him "deal with the Hulk and Khan earlier", implying he had let them get away on AIM's orders. When he threatened Monica Rappaccini, George Tarleton intervened, nearly killing him. Monica insisted that AIM still needed him, however, and Tarleton relented. Sometime later Abomination under the orders of Monica was sent to the small town of Venture Ridge in Wyoming to set up a gamma lab. Attempting to mutate the towns residents into mutated gamma creatures. However Bruce with the help of Jarvis managed to track him down and with the help of the Avengers , Blonsky was defeated yet again and taken into custody with the towns residents saved.

Monica would later create several clones of Abomination, all of which would ultimately be destroyed in battles against the Avengers.[1]

Seemingly those of the Emil Blonsky of Earth-616.

Seemingly those of the Emil Blonsky of Earth-616.

Like this? Let us know!
Retrieved from "https://marvel.fandom.com/wiki/Emil_Blonsky_(Earth-TRN814)?oldid=6100848"
Community content is available under CC-BY-SA unless otherwise noted.