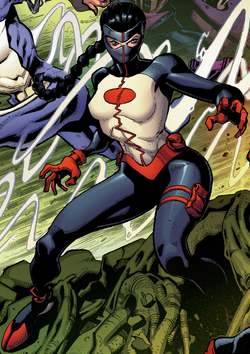 So, how's having untended clouds of Terrigen Mist floating around working out for everybody?

Emily Guerrero, unbeknownst to her, was a Human with Inhuman lineage. She lived with her grandfather, Ivan Guerrero, and brother.[1]

When the Terrigen Cloud came to their home, it affected the entire family, encasing each of them in a cocoon. Emily emerged from her cocoon to see her grandfather standing over her as both of them knew that they had undergone some kind of metamorphosis. She ran out of her room to check on her brother, who had not yet emerged. During this time, Emily's grandfather told her that what had happened would allow them to save the world.[1]

Eight months passed, and Emily, going by the name Synapse, became a member of Commander Steve Rogers's Avengers Unity Division as a representative of the Inhumans. Despite being unprepared for the public eye and life as a superhero, Rogers insisted that Emily stay with the team and vouched for her abilities, even though there was some tension with fellow member, Rogue, who was a mutant. Synapse's first battle as an Avenger was against the Super-Adaptoid.

During the scuffle she tried to read the adaptoid's mind but to no avail, so she used her telepathy to control a flock of pigeons to attack it while the rest of the team were able to finish it off for good.[2]

Telepathy: Synapse possesses the ability to influence the minds of others, be they sapient or primal in nature; however, she has difficulty contacting artificial intelligences, as their thought waves are either synthetic or nonexistent.[2]

Like this? Let us know!
Retrieved from "https://marvel.fandom.com/wiki/Emily_Guerrero_(Earth-616)?oldid=6180872"
Community content is available under CC-BY-SA unless otherwise noted.