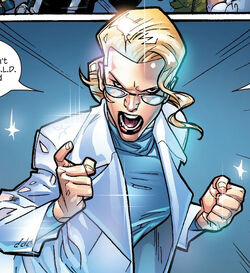 Emma Frost was a former student of Professor Charles Xavier from Chicago. The two eventually became romantically involved, and Xavier left his then-girlfriend Mystique for Emma. The lovers eventually split over ideological differences: whereas Xavier believed in vigilantism and isolating mutants away from the rest of society, Emma believed in greater pacifism and an integrated approach to mutant/human relations. Emma explained she believed Xavier was "too violent."[1]

Having left Xavier, Emma returned to Chicago and became a teacher herself. She began giving mutant education seminars. The governor supported her cause and introduced her to the President's Chief of Staff. Through him, she met the President and helped to organize the New Mutants program, a program designed to educate humans about mutants, avoid a war, and lack ties to Charles Xavier.[1]

The team of young, government- and media-friendly mutants was a strong and noble plan, it backfired during the group's first media appearance. Frost and her selected group were attacked by Sentinels and had to be rescued by the X-Men. After failing miserably at defending the Washington press conferences, the group was disbanded. Back at the school, Xavier tried to convince Emma to stay after she admitted that the whole thing is 'not her world'. As a result, Frost has somewhat reconnected with Xavier and may have a less optimistic view of humans. She returned back to her own school in Chicago along with Cyclops' older brother Havok as her newest student.[2]

The New Mutants plan a failure, Emma severed her ties to the government and altered her school. Her new program, called the Academy of Tomorrow, accepts all talented students, regardless of genetic status.[3]

The Academy of Tomorrow is also rather inclusive of the X-Men; several X-Men were able to attend the Academy's homecoming dance. The Academy has a greater peacekeeping slant than does Xavier's school.[4]

Emma was later killed by the Madrox's dupes during the Ultimatum Wave when they destroyed her school and was last seen being cradled in the arms of one of the dupes.[6]

Organic Diamond Form: Emma Frost was mutant known as a transmorph who possessed the ability to transform her body into a flexible organic diamond form. In many ways, this was similar to Colossus' organic steel form. She must transform all parts of her body, rather than selectively transforming certain areas and could remain in this form for an undetermined amount of time. If she was rendered unconscious, Frost's body will automatically transform into its normal state.

Like this? Let us know!
Retrieved from "https://marvel.fandom.com/wiki/Emma_Frost_(Earth-1610)?oldid=5684843"
Community content is available under CC-BY-SA unless otherwise noted.