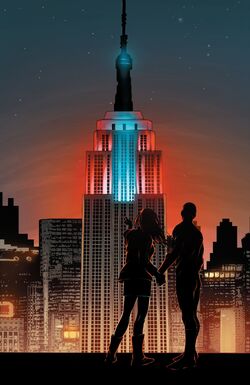 During one of his rampages through New York in 1940, the Sub-Mariner climbed to the top of the Empire State Building. Namor broke off the spire and tossed it down into the streets, over 100 stories below. He then before fled the area.[1]

As ordered by Ultron, the Masters of Evil set their airship, loaded with a new type of hydrogen bomb where the the Avengers were held captive inside, to hover directly above the Empire State Building, to play a game of nuclear blackmail with the authorities. Helped by the Black Knight, the Avengers eventually broke free and defeated the Radioactive Man, Klaw and the Melter, while Whirlwind managed to escape.[2]

Some time later, Arkon transported himself and the Scarlet Witch from Polemachus atop the Empire State Building, where he was about to use the atomic sphere to destroy the Earth, however a number of Avengers arrived to stop him. During the battle, Arkon was stopped when he was contacted by his advisor, who explained to him that Iron Man and Thor created a device that utilized Thor's thunder powers to restore the light to his world. With his world back to normal, Arkon had no desire to destroy the Earth, so he stopped his rampage and bids farewell to the Avengers, returning to his home world.[3]

Many years later, May Parker came up here with his nephew Peter to tell him she knew his secret superhero identity.[4] A while later, Spider-Man was approached by the Jackal, who offered him to join him to bring the world genetic perfection through cloning.[5]

The Empire State Building observation deck was then occupied by the Sensational Hydra, who managed to capture Captain America and assume his identity.[6] Cap eventually escaped his bondage and ran across the streets to stop the impostor.[7]

The Empire State Building also exists in this reality, as the Mighty Thor made a dramatic return here from Valhalla beserking through the city searching for vengeance on his brother Loki.[8] The building can easily be seen from this world's Baxter Building.[9]

On Earth-7642, Spider-Man scaled up the Empire State Building to intercept a blimp that triggered his Spider-Sense.[10]

Dr. Banner tried to kill himself by doing a swan dive off the top of the Empire State Building, but it was the Hulk that landed.[11]

In our world, the building was officially unveiled on May 1, 1931.

Like this? Let us know!
Retrieved from "https://marvel.fandom.com/wiki/Empire_State_Building?oldid=6409324"
Community content is available under CC-BY-SA unless otherwise noted.