View source
watch 02:56
Doctor Strange in The Multiverse o Madness - The Loop
Do you like this video?
Play Sound
Part of the Empyre event

One of the perks of royalty, hon -- the king gets to throw the best parties.

Years ago, as Tarnax IV is being consumed by Galactus, Skrull princess Anelle decides to tell Empress R'Klll about the child she conceived with the Kree warrior Mar-Vell, revealing her mother that the kid survived. R'Klll becomes reinvigorate that the prophesied unifier of the Kree and the Skrulls exists, and uses a translocator to escape the planet's destruction, leaving Anelle to die. In the present, R'Klll is telling Emperor Hulkling about this while she is imprisoned at the brig of the Kree/Skrull flagship. She also reveals her use of advanced Skrull technology to impersonate Tanalth, who was a real Kree soldier, albeit a long-dead prisoner of war. As Tanalth, R'Klll then rose through the ranks of the Kree and was left waiting for a chance to unite the Kree and the Skrulls against a common enemy, then using Hulkling as a figurehead to consolidate an alliance. R'Klll commends Hulkling for actually managing to become the ruler of his people, but tells him that he should have burned the Earth, and warns him that the earthers will betray and leave him alone. Hulkling rebukes his grandmother, and she then asks him about his wedding.

The day before, Hulkling and Wiccan held a proper royal wedding, and Billy was inducted into the Alliance as Teddy's prince consort and court wizard. A party was then held at the flagship's command deck, which was attended by the Avengers, the Fantastic Four, the Guardians of the Galaxy, the Young Avengers, the Knights of the Infinite, Billy and Teddy's former teammates at the New Avengers, and Abigail Brand, among others. Tony Stark, Captain America and Thor reflect on Teddy and Billy's beginnings with the Young Avengers, and then make a toast for Mar-Vell. Teddy sees this and laments he never knew his father, Captain Marvel assures him he would have been proud. Mari-Ell expresses her gratitude to Hulkling for being named Accuser. Abigail Brand walks up to Teddy and Carol to speak to the latter. Brand lashes out at Carol for not keeping Alpha Flight on the loop of the Cotati's resurgence, and sucker-punches her, causing everybody to become tense. Brand tells Carol that she quits Alpha Flight since it's useless, and walks away. Teddy acknowledges the Alliance could have warned the Earth about the Cotati, but Tony points outs they would probably have not believed them, and blames himself for trusting the Cotati. Carol expresses that the blame is collective, but Mister Fantastic absolves them, arguing there was no way of expecting the Cotati's heel turn. Hulkling encourages his guests to keep partying, and then shares a few words with Black Panther and Sunspot before turning to the Young Avengers. Kate Bishop hugs Teddy and Billy, and the two then continue mingling with both of their former teams.

Back in the present, R'Klll continues warning Hulkling that his empire will fall. Hulkling walks away silently, leaving his grandmother to tell him he will wish he had listened to her. Once left alone with Super-Skrull and Captain Glory, Hulkling punishes Kl'rt for the destruction of the Kral System and the murder of his adoptive mother, transferring him to diplomatic service to spend the rest of his life making peace and preventing needless deaths. Teddy gives Glah-Ree the same order, but he refuses to accept the diplomatic posting, arguing that he is a living weapon and can remain holstered until Teddy needs him. In the future, both Hulkling and Captain Glory lay defeated in a wreckage among other fallen Alliance soldier. Teddy laments that he didn't heed R'Klll's words. Suddenly, Abigail Brand steps out of a portal to offer Teddy help. She is accompanied by Manifold and other shadowed figures, and explains that she has built something better than Alpha Flight.

• The end of EMPYRE begins a new age for the Marvel Universe!

• In the aftermath of the cosmic conflict, the forces gather one last time... but why? And at whose bidding?

• New bonds will be forged, new families will be founded, and there’s a new role waiting for Earth... but new destinies bring new dangers – and new enemies! 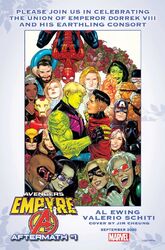