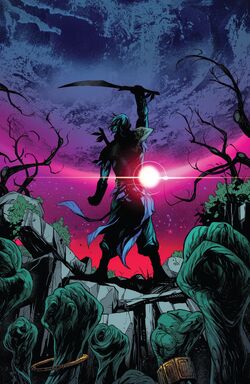 Empyre was the name of the Cotati's new realm.[1]

The Cotati were a pacifist race on Hala, chosen by the Skrulls to take part in a contest against the warlike Kree on Earth's Moon, with the race achieving the most using Skrull technology being declared the victor, earning the chance to become the rulers of Hala and join under the Skrull Empire. The Kree, upon realizing they were going to lose, proceeded to commit a genocide of the Cotati. The Cotati however survived on Hala for many millennia by hiding themselves from the Kree, who had created their own empire. They later contacted the pacifist Priests of Pama who planted them throughout the universe including Earth.[2]

Quoi, the prophesized Celestial Messiah, after learning what had happened to his race, decided to take revenge on all animal life. The other Cotati, still seething in hatred over what had been done to them by the Kree, joined his cause. They started attacking the facilities of the Kree Imperium and Skrull Empire to test their new weapons which could increase a Cotati mage's control over plantlife, and also tried preventing the two from allying. The empires however discovered their plan and managed to convince Teddy Altman in time to become the emperor so that could unite the two empires into the Alliance.[3]

The Kree/Skrull Alliance, having discovered the true plans of the Cotati, decided to attack them on the Blue Area of the Moon. The Avengers and the Fantastic Four proceeded to battle the invaders, believing they had come to wipe the Cotati out. After Iron Man disabled all of the Alliance ships, the Cotati revealed the truth that they were creating a Death Blossom which amplified Quoi's control over all flora. He started killing all those on the ships and revealed that the Cotati planned to create their own empyrean over the whole universe, which he dubbed the "Empyre".[1]

Sequoia offered to let the Avengers live if they stood aside, but was refused and fled before Thor could attack him. Meanwhile, nearly everyone on the Alliance ships was killed, except those on the flagship due to Captain Marvel working with Dorrek and absorbing his Excelsior's power, severing the Cotati's link with plant life there with the resulting burst of energy. The Avengers, Alliance, and Fantastic Four afterwards decided to ally in order to beat back the Cotati who had started attacking Earth.[3] A Cotati spaceship later attacked a lone surviving Alliance ship, but was destroyed by the new Accuser Marvel, who unwittingly killed all the Cotati onboard as Ronan's Universal Weapon proved too powerful.[4]

The surviving Alliance soldiers later battled the Cotati on Earth, winning a battle in a Mexican village near Navojoa with the help of Wonder Man and Mockingbird. The two heroes along with Quicksilver tried to stop the Alliance soldiers when they started executing the Cotati captives, but were overpowered or made to surrender. The densely forested regions around the globe were however devastated, while Wakanda was able to avoid Cotati scouting parties due to its force-field. Ka-Zar went along with Black Knight, Doctor Voodoo, and Scarlet Witch to the Savage Land after learning of the Cotati invasion there. The group was attacked by a group of Cotati and were able to hold them off, but were soon confronted by Man-Thing and Shanna Plunder who were being controlled by the Cotati.[5]

On the Blue Area of the Moon, the Cotati readied the sunward node to launch on Earth's nations. They were discovered by Vulcan who went investigating after seeing plants growing on the Moon's surface, and tried dissuading them from attacking humans. After subduing him, however, they tried interrogating his mind, which triggered memories of him being altered by aliens. This caused him to start raging, resulting in the death of every Cotati in sight.[6]

The powerful Cotati mage Shi Qaanth and his soldiers meanwhile attacked Fort Myer in Arlington County, so they could easily take Washington, D.C., but they were forced to flee after Captain America intervened and helped in turning the tide. Shi Qaanth lost his eye after being shot by an American soldier named Bennett, but secretly infected him before leaving. After Captain America met General Woodley, he utilized the infected Bennet to infect the American general as well, while himself preparing to attack Mexico City.[7]

The Cotati also set up a base in the desolate Genosha as part of their plot to invade Wakanda. Their plans however were interrupted when they were attacked by Genosha's mutant inhabitants, accidentally revived by Scarlet Witch as zombies. Angel's group discovered this when they came to check up on the Genoshan gate, and encountered a group of Cotati fleeing from the zombies before destroying them both. The activities of the Cotati also attracted the attention of the Hordeculture eco-terrorists.[8]

Retrieved from "https://marvel.fandom.com/wiki/Empyre_(Earth-616)?oldid=5641597"
Community content is available under CC-BY-SA unless otherwise noted.