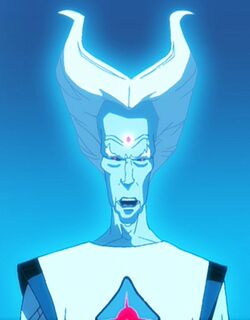 On request from Ronan the Accuser, The Grandmaster forced the Fantastic Four to battle Ronan the Accuser, Impossible Man, Annihilus, and Super-Skrull. The fate of all humanity hung in the balance as the species of the losers would be wiped out. As the matches go on, it was revealed that whoever lost a match became a trophy for the Grandmaster for the rest of eternity.

In the end, it was left to a one on one fight between the Thing and Ronan the Accuser. Ronan called down an energy beam from an orbiting ship giving him incredible strength, to savagely beat The Thing. Ben continued to fight despite being in incredible pain and outmatched. As Ronan was about to deliver the final blow, the Grandmaster declared Ben as the winner as he was both strong and brave enough to continue fighting even when it was hopeless.

The Grandmaster offered Ben one wish which he would fulfill no matter what. Instead of wishing himself back to normal, Ben wished for the release of his friends and the villains as well as to prevent the destruction of the species of the losers. The Grandmaster fulfilled his wish but promised that there will be other Contests, and that Ben would be back on the contest, regardless of the fact if he will be challenged or not.[1]

Like this? Let us know!
Retrieved from "https://marvel.fandom.com/wiki/En_Dwi_Gast_(Earth-135263)?oldid=5577525"
Community content is available under CC-BY-SA unless otherwise noted.