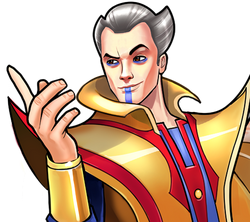 The Grandmaster was a member of the Elders of the Universe, one of the oldest beings in the universe, and the last of his kind. As his life goal and obsession, the Grandmaster enjoyed taking part in games.

The Grandmaster ran a gladiator tournament where he forced various different aliens to take part in fights, treating them like pawns in a game. One day Hela attacked the Grandmaster operation and took it over.

Like this? Let us know!
Retrieved from "https://marvel.fandom.com/wiki/En_Dwi_Gast_(Earth-TRN562)?oldid=6100454"
Community content is available under CC-BY-SA unless otherwise noted.