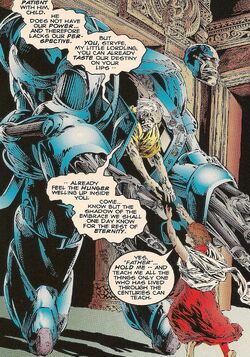 This version of En Sabah Nur was the future version of the modern era. Roughly in the late 36th century, Apocalypse ascended to power and ruled much of North America unchallenged, for 100 years, where humans and whoever else resistant to his rule could be killed at any moment and the only opposition was a quiet hope and belief in the Twelve, mutants who battled Apocalypse in the modern era, by the Order of the Witnesses. Apocalypse commanded the Prelates and Canaanite Army and, at some time, sired a daughter, Diamanda Nero, who became a High Counselor and viceroy. However, when Apocalypse became debilitated, burning through host bodies faster and faster, Nero assumed much of his power and position. After hearing of the arrival of a chronal anomaly, Apocalypse began creation of three new weapons to cull the weak, but Nero had to finish, as he was preparing to transfer his essence.[2]

After Alyr'n Summerset attended Apocalypse's Festival of Resurrection and battled his prelates and Diamanda, she began to gather followers, under the name Clan Askani, meaning "family of outsiders", and opposed Apocalypse's rule. Apocalypse sent Nero to deal with the Clan and the Order of the Witnesses, a group believing Rachel Summers was the "Lost Child of the Twelve". Nero successfully destroyed the Order of the Witnesses, but while battling the Askani in the ruins of the Savage Land, Nero was left depowered, by Rachel.[3]

Over the next several years, believers of the Askani deified the ancient X-Men: "the Xavier" became a father figure, the Bright Lady a mother goddess, and the prophesied "Dayspring" or "Askani'son" their messiah.[4]

3000 years prior, Apocalypse had infected the infant Nathan Summers with a Techno-Organic Virus. Nathan's father, X-Factor's leader Cyclops, reluctantly allowed a Sister Askani to take Nathan forward to her time, to cure the virus. Upon baby Nathan's arrival, Mother Askani cloned him in an attempt to save his life. Learning of the infant Askani'son's arrival, Apocalypse ordered his Canaanites to massacre the Askani, killing many Askani, including Throeblood, then Apocalypse himself seized the clone, believing him to be Nathan. Not knowing this second child to be a clone, Apocalypse ceased his hunt for the real Nathan and raised the child, naming him Stryfe, after a villain that he faced in the modern era whose machinations nearly destroyed him but who, in the end, only made Apocalypse stronger (which was actually the adult Stryfe), and training him intensely under his tutelage, to become a terrorist. Apocalypse later revealed that he was actually making Stryfe powerful, so that he could one day claim the boy's body for his own. Since his current body had grown old and feeble, Apocalypse planned to transfer his consciousness and power into Stryfe's. Ch'vayre voiced disapproval of this plan many times over the next decade, believing it went against Apocalypse's "survival of the fittest" credo.

Apocalypse had succeeded in wiping-out the Clan Askani, but a small sect lived-on as the Clan Rebellion. Apocalypse encouraged Stryfe's arrogance and cruelty as he grew into adolescence and had him watched over by Apocalypse's aide, Ch'vayre. Years later, during the ritual of transferring Apocalypse's mind into Stryfe, Ch'vayre openly opposed and was restrained. "Redd Dayspring" and Ch'vayre attacked Apocalypse, stopping him from placing his essence into a teenage Stryfe, until Apocalypse beat them and realized that Stryfe was a clone and not the original. Stryfe's body possessed the ability, but not the capacity to maintain Apocalypse's essence. Deciding to go-through with it, until he could find another body, Stryfe began to mentally fight against Apocalypse's intrusion. Confronted by "Slym", "Redd", and Nathan "Dayspring" (as the Askani'son was now called), Apocalypse used his power to see through their physical bodies and recognized them as Cyclops, Jean Grey, and Cable, stating that if he had met them before, he could have deduced this earlier. After Slym, Redd, and Nathan attacked Apocalypse, the disillusioned Ch'vayre betrayed his master, distracting him, and Slym ordered Nathan to disrupt any telepathic links between Apocalypse and Stryfe, seemingly killing Apocalypse. After so many millennia of menacing humanity, the elderly Apocalypse finally perished in combat with the teenage Nathan, who would grow up to become the warrior Cable.[5]

Seemingly the same as En Sabah Nur (Earth-616), although the specifics may vary due to his age and the current host body containing his consciousness.

Like this? Let us know!
Retrieved from "https://marvel.fandom.com/wiki/En_Sabah_Nur_(Earth-4935)?oldid=5485798"
Community content is available under CC-BY-SA unless otherwise noted.