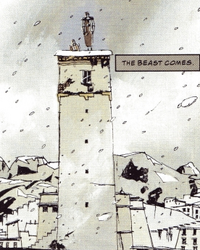 The Enclave[1] was the refuge of an Inhuman group in the Himalayan Mountains, Tibet.[2]

That group had splintered due to opposition to the usage of the Terrigen Mist.[2]

The members of the Enclave followed the Mandate, their sacred law, which dictated them to stay isolated in order to remain pure and perfect, enforced by the Tribune, Tane.[1][2] That Mandate was applied also by killing any outsiders.[1]

As monstrous mutations occurred in the Enclave's small gene pool,[2] including the monstrous Slith, [1] Matriarch Nirissa convinced Tane to agree to her plan of arranging her daughter Serra (whom Tane wished to marry) to have children with the mutant Wolverine, for her grandchildren and their descendants to acquire his healing factor.[1][2]

Retrieved from "https://marvel.fandom.com/wiki/Enclave_(Inhumans)_(Earth-616)?oldid=5845887"
Community content is available under CC-BY-SA unless otherwise noted.