Enemy of the State II 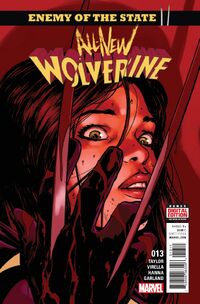 After receiving a package with a test-tube of Trigger 42, Laura decides that her current apartment is not safe anymore and together with Gabby and Jonathan moves to one of Logan's old safehouses. After light goes off in the cabin, Laura goes to check on a nearby town named Daylesville.

As she was getting information about the blackout from the owner of a local gas station, a fleet of water bombers arrived dropping the Trigger Scent all over the town.[1]

When Laura came to, everyone in Daylesville was already dead. Soon after the team of S.H.I.E.L.D agents led by Nick Fury arrived and arrested Wolverine. Learning about the water bombers, Fury sent two fighter planes to intercept them, but they got shot down by a flying fortress under the flag of Madripoor. Fearing an international incident Fury decided not to pursue. This prompted Laura to escape.

After regrouping with Gabby and escaping encirclement, Laura contacted Ash, a pirate captain whom she once spared. Ash took Laura and Gabby to Madripoor, but secretly she worked for Kimura.[2]

Laura became suspicious of Ash when the ship stopped at a distance from Madripoor. Using her heightened senses to check what was happening led her to discover that the cargo Ash transported consisted of enslaved children. Laura confronted Ash and cut off her hand. Moments later Bellona, Roughhouse and other Kimura's henchmen arrived and captured Laura. Bellona ordered Roughhouse to sail the children and Gabby back to the states and took Laura to Kimura.[3]

However, Gabby managed to escape from the ship and contact time-displaced version of Angel who arrived to help, bringing with him Gambit and past version of Jean Grey. Meanwhile, Kimura sent Wolverine after Tyger Tiger whom she previously managed to tag with trigger scent. Laura fought off Tyger's security and destroyed her LMD, but got stopped by Gambit before she killed anyone.[4]

She was then taken to Tiger's safe house where, with Jean's help, Laura managed to break through her programming, freeing herself from being influenced by the trigger scent. While Laura was fighting her programming S.H.I.E.L.D. agents arrived, invited there by Tiger, but before any conflict over Laura could arise, they were attacked by Kimura's flying fortress.[5]

Tiger revealed that she owns a prototype of Model-Prime Iron Man armor and lent it to Laura. With its help, the combined forces of X-Men, and S.H.I.E.L.D. agents staged a counterattack against Kimura. In the end, Laura drowned Kimura, and Bellona revealed that she killed the Daylesville population after Wolverine incapacitated herself to avoid murdering anyone under the influence of Trigger 42.

With that part of her problems resolved, Laura finally decided to face Debbie and Megan again.[6]

Retrieved from "https://marvel.fandom.com/wiki/Enemy_of_the_State_II_(2016)?oldid=5345822"
Community content is available under CC-BY-SA unless otherwise noted.