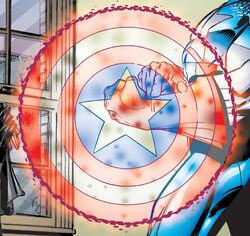 The earliest form was used by a member of the Raiders and later adopted by Iron Man. These emitted photons into a small round shape and were generally a supplement to the rest of their armor's defenses.[1]

U.S.Agent received a photon shield when he joined Force Works; it could be activated by voice command.[2] Around this time S.H.I.E.L.D. produced its own design using cooled plasma. Captain America briefly used the plasma shield while in exile. Not only were they useful protection, but the shields could be used as controllable projectile weapons.[3]

An updated version of the plasma shield with a flexible containment matrix was given to Steve Rogers by Sharon Carter while his normal shield was being repaired. This shield can morph into other forms if needed, such as a staff, sword, or rope. It could even take on the design of his old shield.[citation needed] This shield was later carried by the time traveler Primax when he took up the mantle of Captain America.[4]

Taskmaster managed to acquire a similar device from S.H.I.E.L.D., possibly the cooled plasma version or another version of it. Not only does it supplement his Adamantium dupe of Captain America's Shield, but Taskmaster has used it for energy "claws" and to simulate Spider-Man's Web-Shooters.[citation needed]

Stark's S.K.I.N. armor combined an energy blade and shield; this shield could be expanded to cover the entire armor.[citation needed]

After Steve Rogers replaced Norman Osborn, he began using a new energy shield, as the real shield was being used by Captain America. This shield uses Zero-point Energy. The energy shield was able to be thrown and could ricochet off surfaces to hit targets, and would dissipate shortly after, upon which a new shield would be generated. This was so enemies could not use the thrown energy shield against him. Buck Lime acquired a Zero-point Energy Shield generator for Moon Knight.[citation needed]

Energy shields are contained in devices worn on the wrist or within a gauntlet. When needed the device is activated and the shield 'expands' from the emitter.

Like this? Let us know!
Retrieved from "https://marvel.fandom.com/wiki/Energy_Shield?oldid=6431796"
Community content is available under CC-BY-SA unless otherwise noted.