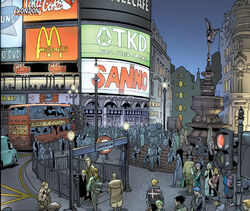 Rain upon snow. Only in England.

England, officially the Kingdom of England, is a country that is part of the United Kingdom. It shares land borders with Scotland and Wales. England is separated from continental Europe by the North Sea to the east and the English Channel to the south. Its Capital and Largest city is London.

Go here for the history of England.

Like this? Let us know!
Retrieved from "https://marvel.fandom.com/wiki/England?oldid=6005852"
Community content is available under CC-BY-SA unless otherwise noted.