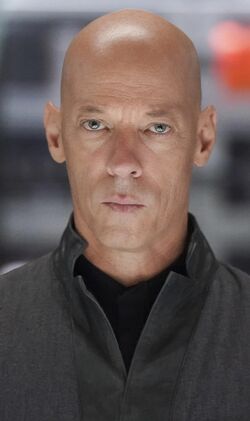 30,000 years ago, the people of Chronicom, located in the Cygnus system, deployed Enoch to planet Earth in order to study and record the development of the Human race. For centuries, he lived among the humans, observing them and charting their progress.[3]

In the early 21st century, Enoch became aware of the existence of the young Inhuman Robin Hinton, who experienced visions of a world 74 years into the future. Though Enoch was forbidden to interfere in the course of human history, Robin's visions showed the potential extinction of mankind at the hands of blue-skinned invaders, and Enoch had also been given orders to prevent any extinction-level events. To this end, he kidnapped S.H.I.E.L.D. agent Phillip Coulson and his team from a diner and sent them forward in time to the year 2091.[4]

However, Robin's visions did not include Leopold Fitz and thus he left him behind, resulting in Fitz being captured and interrogated on suspicion of helping Coulson and his team escape a federal investigation for the attempted murder of Glenn Talbot. With the help of Lance Hunter, Fitz eventually escaped custody and, distraught at the disappearance of his friends and convinced that Enoch had harmed them, he tracked Enoch down and forced him to take them to Robin. Unable to replicate the methods that took Coulson and his team into the future, Enoch placed Fitz in cryogenic suspension.[3]

During a Time Travel mission to stop the Chronicom Hunters from destroying the S.H.I.E.L.D. in the past, Enoch had sacrificed himself to save the team from being crushed by a Time Vortex Loop.[5]

Enoch is extremely long-lived, having been around since the early days of humankind.

Synthetic Skin: Enoch possess synthetic human skin, which he wears to disguise himself as one of them. The color of the synthetic skin can be changed at will, as demonstrated when Enoch turned it blue in order to pose as a Kree.

Like this? Let us know!
Retrieved from "https://marvel.fandom.com/wiki/Enoch_(Earth-199999)?oldid=5705862"
Community content is available under CC-BY-SA unless otherwise noted.