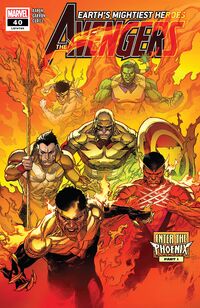 The Phoenix Force has returned to Earth to select a new champion, with the Avengers, Namor, and other various heroes and villains getting caught in the crossfire and having to battle for the Phoenix's immense power. The Phoenix Force holds a tournament to find its next host, empowering many participants from around the world with a portion of its power and pitting them against each other:

Retrieved from "https://marvel.fandom.com/wiki/Enter_the_Phoenix?oldid=6042057"
Community content is available under CC-BY-SA unless otherwise noted.