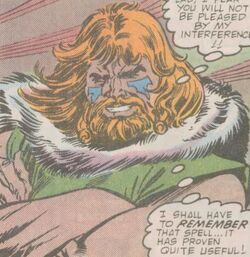 The Dagda was the son of Iarbonel and Danu, and was born and raised in Tír na nÓg, in the dimension of Otherworld.

He came to rule Murias, one of the four cities inhabited by the Tuatha de Danaan (the Celtic gods) and became one of the most skilled users of druid magic of his people.[1] He also sired the war god Bodb Derg with the war goddess Morrigan.[6]

Dagda was a deity worshiped by Cimmerians during the Age of Conan.[2]

In 1896 BC, the Tuatha led by the Dagda's older brother Nuada, with the Dagda himself serving as Nuada's second-in-command, went to the Earth realm.

After losing his hand, Nuada was unable to rule and was suceeded by half-Fomorian Bres. After a seven-years reign, he was deposed by the Tuatha who chose the Dagda as their new king. His eldest son, the war god Bodb Derg, believing himself a better leader than his father, secretly plotted to control the Tuatha de Danaan by force.[1]

Circa 350 AD, the Milsians(ancestors of the Celts). arrived to Ireland. The Dagda decided that the Tuatha de Danaan should reliquish their holdings in the Earthrealm and return to Otherworld. Bodb Derg enraged and attempted to control the Tuatha by force but was defeated and banished to the netherworld of Annwn.[1]

In modern times, when Leir felt honor bound to aid the Asgardians against the Heliopolitan god of evil Seth as repayment for Thor previously helping Leir vanquish one of Seth’s beasts from Otherworld, the Dagda supported the decision (even though the Tuatha de Danaan and Asgardians had until that time been hereditary enemies).  The Dagda deployed Tír na nÓg’s greatest warriors, led by Leir and Caber, to defend Asgard against Seth’s invading forces, but remained in Otherworld to conduct the battle strategy from afar.[7]  However, when the impulsive Leir and the strategic Asgardian war god Tyr began to clash over a disagreement in battle tactics, the Dagda decided that it would be best to also travel to Asgard in order to assist the Asgardian light god Balder in keeping peace among Asgard’s allies.[8]  As Seth’s invading army continued its unrelenting assault on Asgard, Tyr and the Asgardian warrior Sif contemplated a strategic retreat to regroup, an idea that Leir considered cowardly until the Dagda convinced him it was the best option.  Asgardian reinforcements eventually arrived, Seth was defeated, and the Tuatha de Danaan returned to Otherworld.[9]

Soon after, a giant troll attacked a village of the Tuatha de Danaan in Tír na nÓg.  The Dagda congratulated Leir, who fended off the troll’s attack, and informed him that the troll was sent by their enemies the Fomorians. Driven by vengeance, Leir led Caber and a troop of Celtic warriors into the Dark Realm of the Fomorians to kill their enemies in retaliation.  But before Leir was able to draw Fomorian blood, the Dagda conjured a swarm of hornets which caused the would-be combatants to scatter.  When Leir later asked the Dagda why he stopped the battle, the Dagda explained that the initial Fomorian attack did not result in any death and therefore Leir was foolhardy to respond disproportionately with lethal force.[4]

Months later, the Dagda channeled his magic through an ancient druidic temple to locate the Asgardian realm after it drifted into the Negative Zone because its anchor to Earth, the Bifrost, had been severed.  At Leir’s request, the Dagda opened a mystic gateway from Otherworld to Asgard; but once Leir boastfully announced his plans to venture to Asgard in order to claim Sif as his bride, the Dagda was unable to close the gateway in time to prevent Leir’s departure. As the Dagda closed the gateway, Caber followed Leir to Asgard in order to ensure his impetuous actions did not spark a war with the Asgardians.[10]

The Dagda possesses the conventional physical attributes of the Celtic gods.

The Dagda has vast magical energy powers that surpass the energy-wielding of most of his fellow Tuatha de Danaan.[1]

The Dagda possesses superhuman strength enabling him to lift 90 tons without using his other powers.[1]

The magical caldron Undry could feed entire nations without emptying, as it contains a perpetual supply of physical and spiritual nourishment.[1]

His harp could produce music to bend the seasons to his will, extending autumn or hastening spring for summer at will,[citation needed] by controlling atmospheric conditions.[1]

The Dagda owns an enchanted[citation needed] wooden club[1] with enough power to slay nine men with a single blow or to restore those fallen in battle back to life. When he dragged the ground with it, he created furrows in the earth.[citation needed] He used as a striking weapon, or as a wand to channel his spells.[1]

Like this? Let us know!
Retrieved from "https://marvel.fandom.com/wiki/Eochaid_Ollathair_(Earth-616)?oldid=6435569"
Community content is available under CC-BY-SA unless otherwise noted.