View source
watch 01:36
We're Getting Mutants in the MCU - The Loop
Do you like this video?
Play Sound
Spoiler Warning!
This page may contain spoilers with plot and/or ending details about stories which have been only recently published or broadcast.
Please see our spoiler policy for our rules governing articles about such subjects.

...But the Swordsman's going to surprise them all!

Throughout his Avengers run, Steve Englehart slowly built the mysterious Mantis into one of ’70s Marvel’s most intriguing characters. Here, her tale reaches its cosmic climax in a saga spanning space and time—“The Celestial Madonna!” When Kang the Conqueror arrives, the action begins. Before it’s over, Kang, Rama-Tut and Immortus will have you time-twisted in two. And that’s just for starters! The origin of the Vision is revealed and he and the Scarlet Witch wed. Then, the Avengers put out a call for new members. Beast, Hellcat and Moondragon join, while Captain America, Yellowjacket and the Wasp return. Each will be tested in a second war with Kang and the Squadron Sinister. It’s a classic conflict that teams the Avengers with the Marvel heroes of the Old West!

Avengers #140
"A Journey to the Center of the Ant"

Giant-Size Avengers #2
"A Blast From the Past" 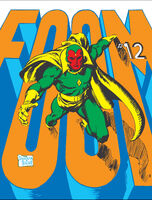 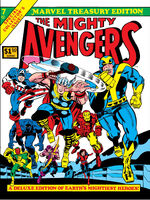