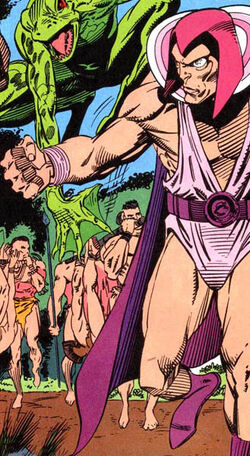 Equilibrius was one of the first Savage Land natives to be artificially mutated by Magneto.[1] As one of the Savage Land Mutates, he served Magneto for some time, but did not return from Chile after being imprisoned there with his teammates by the Avengers until much later.[2]

Later he did appear again as a member of the Savage Land Mutates under the leadership of Brainchild.[3]

Induce Vertigo: Equilibrius could psionically influence his opponents to look into his eyes. He could also cause any who looked into his eyes to experience crippling vertigo.

Like this? Let us know!
Retrieved from "https://marvel.fandom.com/wiki/Equilibrius_(Earth-616)?oldid=5259877"
Community content is available under CC-BY-SA unless otherwise noted.