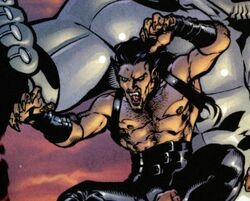 Blade assumed he was immune to vampirism but found that during a battle with Dracula he was turned him into a Vampire, and found himself decending into a ravenous madness. He joined the Black Champions formed after the Apollo 13 mission brought back a virus which wiped out all humans who are melanin deficient.[1]

Like this? Let us know!
Retrieved from "https://marvel.fandom.com/wiki/Eric_Brooks_(Earth-22025)?oldid=5623921"
Community content is available under CC-BY-SA unless otherwise noted.