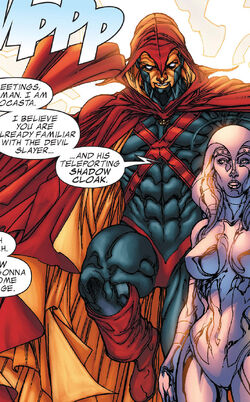 I believed in you -- trusted you! That was my mistake! You used me -- and I don't like being used!

Eric Simon Payne was a former U.S. Marine and later soldier of fortune and one time member of a demon cult who turned on the cult after obtaining the mystical Shadow Cloak and unlocking his own latent psychic abilities.[citation needed]

Payne has served in the Vietnam War, he has served the mob, and he used to serve the Cult of Harvester of Eyes. Each time his service was rewarded with betrayal. He was sick of secret motives and unquestioned obedience.[citation needed]

He had already lost his wife, his innocence, and his idealism, before meeting with the Defenders.[citation needed] He hooked up with them while battling Vera Gemini[2] and eventually joined their ranks on a full time basis during their war with the Six-Fingered Hand.[citation needed]

Eric was, however, plagued by mental instability and guilt over his past actions and, after turning himself in for crimes committed during his time as a mercenary, eventually ended up in an asylum. He discovered a shard of the Nexus of All Realities and briefly became involved with the Man-Thing and with the woman named Sorrow (who became his partner and lover for a time).[citation needed]

After the Civil War, he was listed by Tony Stark as a potential recruit for the Initiative,[3] and was willing to join a new team of Defenders headed by Nighthawk. However, when Nighthawk suggested it to Initiative boss Tony Stark, Stark declined the offer. Instead, Eric became a member of the Hawaiian Initiative team, the Point Men, serving the team as their "Monster Hunter."[citation needed]

During the Skrull Invasion, when the new 3-D Man arrived in Hawaii, Devil-Slayer informed him that he had sensed portents of doom all day. When 3-D Man identified team member Magnitude as a Skrull impostor, the Skrull attacked and severely wounded the other Point Men, Star Sign and Paydirt. The Skrull was killed, and Devil-Slayer used his Shadow Cloak to teleport Delroy to Camp Hammond before taking Star Sign and Paydirt to a hospital. Devil-Slayer later appeared in Utah with the cyborg Jocasta to aid 3-D Man and the Skrull Kill Krew.[citation needed]

He joined Wonder Man's Revengers and successfully attacked the Avengers Mansion.[4] He was later in the day defeated by the Avengers and New Avengers combined forces, and while being interrogated, explain his participation by claiming that he had seen countless realities, and the wish of being among the winners in a world without Avengers.[5]

Like this? Let us know!
Retrieved from "https://marvel.fandom.com/wiki/Eric_Payne_(Earth-616)?oldid=6105491"
Community content is available under CC-BY-SA unless otherwise noted.