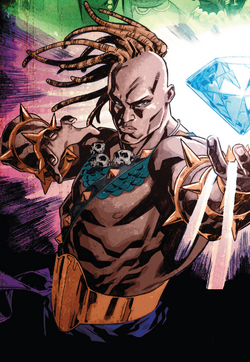 In a Martian-conquered Earth from a possible future, Wakanda was the last stronghold of humanity. When he was a child, Erik Killraven and his mother were exiled from the secluded nation, and were left at the mercy of the Martians. In captivity, Erik's mother told her son stories about Wakanda with the intention to kindle his heart with the flames of liberty. Erik grew up rebellious, but also became hateful towards Wakanda, coming to resent their freedom. Killraven was a gladiator in the Martian arena, and was experimented on, being granted the power of clairsentience. When he escaped with M'Bakshulla, his powers led him to the Time Diamonds.

Killraven and M'Bakshulla, the Freemen, travelled back in time with the intention to debilitate Wakanda so it would fall with the rest of the world against the Martian invaders when the time came.[1] They first attacked the garden of the Heart-Shaped Herb, the power-bestowing plant the legacy of the Black Panther hinged on. They were confronted by the king T'Chaka. While T'Chaka managed to fend off the intruders, he was distracted by the explosion that destroyed the garden, and was killed.

The Freemen retreated to the outskirts of Wakanda, where they were confronted by the returning prince T'Challa. T'Challa was briefly possessed by the demonic entity Zarathos and killed M'Bakshulla, but rejected Zarathos' power after snapping out of a thirst for souls. Killraven impaled T'Challa from behind, killing him in retaliation for M'Bakshulla's death.[2]

Killraven returned to Wakanda and interrupted a conference between princess Shuriri and the delegates of the nation, planting bombs with the intention to further destabilize the nation.[2] He was intercepted by the revenant T'Challa, empowered once again by Zarathos and becoming the Ghost Panther. T'Challa battled Killraven while Shuriri disarmed the bombs. Despite's the Ghost Panther's power, Killraven got the upper hand due to years of fighting experience. In the afterlife, T'Chaka persuaded Zarathos into accepting his service in exchange for aiding T'Challa. Zarathos returned T'Chaka to life in the form of a demonic panther. With his clairsentience thrown off-balance by T'Chaka's return, Erik attempted to escape, but his soul was consumed by Ghost Panther.[1]

Clairsentience: Killraven was experimented on by the Martians, fostering extrasensory powers in him. Killraven's clairsentience manifests based on need, and it most notably allows him to predict the moves of his opponents.[1]

Like this? Let us know!
Retrieved from "https://marvel.fandom.com/wiki/Erik_Killraven_(Warp_World)_(Earth-616)?oldid=5021497"
Community content is available under CC-BY-SA unless otherwise noted.