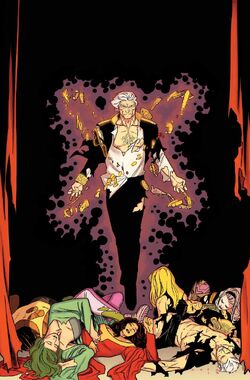 King Erik Magnus shared a similar history to his Prime Universe counter-part. As a child he and his family were captured by the Nazis and were sent to Auschwitz. In January of 1945, the camp was on the verge of being invaded by Soviet Forces and to spare them being killed, Edie hid her and Erik in a pile of corpses. They were later discovered by the Soviets and Magda died, but handed her son over for protection. Distraught, his mutant powers activated and he ripped one of the giant ovens out.[3]

Erik moved to Eastern Europe and as a young man fell in love with a woman named Magda, whom he married and had a daughter named Anya. After using his powers to scare his employer into paying him what he was owed, they burned down his house with his young daughter still inside. Magda returned from a visit to the supermarket to find Erik accosted by a mob of humans who savagely beat him. He used to his powers to knock down his agressors, but after an explosion caused by the fire killed his daughter, he killed the whole mob of humans. After realizing that Erik was a mutant and that he had killed everyone, Magda fled, unbeknownst to Erik she was pregnant with twins.[3]

A year later, Erik had created a small, united force of mutants who fought against their human oppressors. While in France, Erik met and fell in love with an American human named Susanna Dane who fought with him for his cause. After Susanna revealed that she was pregnant with their child, Erik sent her away, fearing that her continued association with him could lead to hers and the child's deaths.[3]

After Bolivar Trask created the mutant hunting Sentinel robots; Erik, now using the name Magneto, fought them in Egypt. After a skirmish in which several of his compatriots were killed, Magneto was approached by the ancient mutant and Celestial steward of evolution, Apocalypse, who proposed an alliance. Conflict soon arose between Magneto and Apocalpyse however. Apocalypse disapproved of Magneto's shows of mercy towards humanity and those Apocalypse considered weak and unworthy. The two fought, with Magneto emerging as the victor and undisputed leader of the mutant resistance. After a Sentinel attack on their home base, Magneto declared war on humanity, vowing to bring the fight anywhere mutants were being oppressed. This declaration was aired on live t.v. and brought him to the attention of countless mutants around the world, among them the powerful telepath Charles Xavier.[3]

During the ensuing war he enlisted the aid of all three of his kids, (his relationship with them was only known by Magneto) and several years later, Magneto and his army liberated a mutant concentration camp in America, where his life was saved by Xavier, which became the start of a close friendship. Magneto's army had relocated to Asteroid M, a stronghold in orbit around Earth. Xavier argued against Magneto's insistence on war, but after examining the memories of a mutant refugee from Genosha, a nation where mutants were enslaved, Xavier agreed that there was no choice and that they had to liberate Genosha. They succeeded, after a skirmish against the Red Guard, in which Xavier lost the use of his legs. Genosha was emptied of humans and declared a new mutant nation.[4]

Magneto's new nation began pursuing diplomacy, creating ties with the Inhumans, who vowed to come to Genosha's defense in the case of a human attack, with the Atlanteans who agreed to supply war materials and Atlantean technology, and Wakanda who offered to supply Genosha with Vibranium and to sign a non-aggression treaty with them, thus recognising it as a sovereign nation. Anti-mutant sentiment continued to rise across the world, especially in America. Magneto chose to have a prominent anti-mutant activist by the name of Graydon Creed assassinated, which prompted a response by S.H.I.E.L.D. who sent a special ops team to destroy Genosha. They failed, but Xavier was killed by Bucky Barnes.[5]

This prompted Magneto to take the fight to the USA, together with his fellow mutants. Magneto brought down the S.H.I.E.L.D. Hellicarrier and fought a final battle against the Sentinels in Central Park, with the aid of the human S.H.I.E.L.D. agent Carol Danvers, who had been supplying the mutants with information. The Sentinels were defeated, and the President of the United States captured. Magneto and Genosha was now the world's premier superpower, with large parts of the world under his control as King.[6]

Seemingly those of the Max Eisenhardt of Earth-616.

Seemingly those of the Max Eisenhardt of Earth-616.

Like this? Let us know!
Retrieved from "https://marvel.fandom.com/wiki/Erik_Magnus_(Earth-58163)?oldid=6076698"
Community content is available under CC-BY-SA unless otherwise noted.