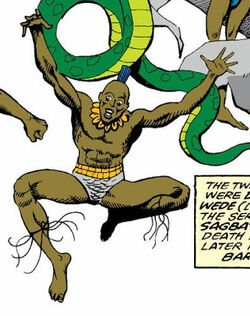 Eschu (also known as Eleggua), god of crossroads and communication, and his twin brother Legba, god of gateways were the children of the twins Lusa and Mahu, and among the younger Vodū.

They served as masters of the Loa, supervise them and are often the first Vodu invoked by humans when they wish to call upon either loa or other Vodu for help.

Lusa, Mahu and their family descended to the city of Ife, the legendary first city of the the Yoruba people, involving directly themselves in mortals' matters, and were first worshiped by the Fon people of Dahomey (modern-days Benin and the Yoruba of the Niger River valley (modern-days Nigeria) starting in the 12th century.[1]


In modern times, he empowered the human vigilante Eleggua of the Santerians.[1]

Presumably those conventional to the Vodū.

As the god of communication, Eleggua also understands all languages and can cause acute confusion in and alter the communication abilities of others.[1]

Like this? Let us know!
Retrieved from "https://marvel.fandom.com/wiki/Eschu_(Vodū)_(Earth-616)?oldid=6187801"
Community content is available under CC-BY-SA unless otherwise noted.