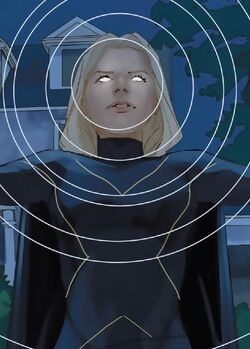 ...You turned into such a wonderful little femme fatale in the end, didn't you? I'm ever so proud of all my girls. But you...You are the one I am the most proud of.

While Emma Frost lay in a comatose state, Dr. John Sublime harvested eggs from her to begin experimentation. The Weapon Plus program then used the eggs to create thousands of identical mutant girls in the hope of developing a powerful weapon capable of killing every mutant on Earth by combining their telepathic abilities. The project was designated Weapon XIV, and the girls were incubated and artificially aged inside the subterranean level of The World.[1] While most girls remained dormant, five were sent to infiltrate the Xavier Institute as student sisters to hone their talents for Sublime's purpose.[2][3]

After the Xavier Institute went public,[4] Esme and her sisters were enrolled as orphan quintuplet sisters.[3] To protect their secret origins, the girls unconsciously placed mental blocks in the minds of the faculty to prevent them from investigating their background.[5]

The girls quickly gained the moniker "The Stepford Cuckoos", though their chosen codename was the Five-In-One. Emma Frost took a special interest in the girls, and the Cuckoos became her protégés.[6][7]

Esme began to distinguish herself from her sisters when she developed a crush on a student who turned out to be Stuff, an advanced guard of the Shi'ar.[8] Due to embarrassment over her crush and jealousy of Sophie's power and influence, Esme began secretly using Kick and working with Xorn. Esme began subtly influencing her sisters to gain control of their hive mind. When Quentin Quire led a Kick fueled student rebellion at the X-Mansion, Sophie and the other Cuckoos covertly snuck into Cerebra. Using Kick to amp up her powers, Esme and her sisters were able to stop Quire. Unfortunately, Sophie died in the process.[9] Unbeknownst to the others, Sophie was actually being influenced into these actions by Esme, who was also using Kick.[10]

Shortly after the death of Sophie, Esme attempted to murder Emma by shooting her with a diamond bullet. While Bishop and Sage investigated the murder, Esme fled the X-Mansion fearing that the truth of her involvement in the deaths of Sophie and Emma would be revealed.[11]

When Esme returned, it was alongside her lover Xorn posing as Magneto and his Brotherhood of Mutants. Esme and Xorn had both become mentally unstable through excessive use of Kick. When Xorn's affections were withheld from her, Esme turned on him, and Xorn killed her by burying her metal earrings in her brain.[12]

When an unstable fraction of the Phoenix Force sparked inside the girls, the dormant Weapon Plus nanotech inside their bones was activated. This nanotech briefly reanimated Sophie and Esme, who directed their sisters back to The World to activate Sublime's plan for the destruction of the mutant race. Sophie and Esme were later killed by Celeste wielding the Phoenix.[13]

When the Chaos King put the living asleep and opened the underworld, Esme, Sophie, Thunderbird, Banshee, Moira MacTaggert, and several of Multiple Man's duplicates were among the resurrected. Sophie confronted Esme about her death with little resolution. While searching for answers among the remains of the Xavier Institute, the former X-Men were attacked by the Carrion Crow. Sophie sacrificed herself to save the others,[14] and Esme later sacrificed herself to save her sister.[15]

Esme and Sophie returned from death to celebrate their birthday; however she selfishly wanted to regain her full strength and manipulated her sisters into helping her. To make sure no one got in the way, she killed Sophie so she could manipulate Mindee, Pheobe, and Celeste again.[16]

Following the foundation of a mutant state in Krakoa by the hand of Charles Xavier and his allies, Esme resurfaced as a citizen of the nation, having been presumably reborn by the hand of The Five, a group of mutants capable of combining their powers into a process of resurrection, brought together by Xavier as part of his plans for mutant ascension.

The Stepford Cuckoos accompanied Magneto for a meeting with a delegation of international ambassadors and representatives at the Jerusalem Habitat, in order to assert the new status quo of mutantkind, and set the terms of the new mutant state and its relationship to humanity.[17]

When a mutant baby went missing in Philadelphia, Kid Cable headed to the scene of crime with Esme Cuckoo, who was jealous that her fiancé previously took her sister Celeste on a better and romantic date. After they made out, Kid Cable, who was actually dating all the five Cuckoo sisters at the time, asked Esme what the other Cuckoos were doing when he was on a date with one of them and if they ever got jealous. The girl claimed her sisters were doing other stuff, when they actually were psychically spying on them from their room on Krakoa.

However, Nathan and Esme date night was abruptly interrupted when the Space-Knights from Galador came to Earth, detecting the energy signature from their mythical sword - the Light of Galador - after it was recovered by Nathan in Krakoa's wilds. They crashed into the house where Cable and Esme were hanging out and took the sword away from them.[18] Kidnapped by the Space-Knights along with Esme, Kid Cable discovered his older self (who foresaw and accepted his own death) had actually left him an ace hidden inside his techno-organic steel sleeve to use against the knights: a nuclear bomb. After retrieving his new sword, Kid Cable lured the knights to a remot desert where he sets off the bomb, completely obliterating the Space-Knights. Nathan and Esme escaped back to Krakoa through an emergency portal without collateral damage, promising to see each other again after Cable's date night with her sister Phoebe the next day.[19]

Esme's powers are identical to those of her sisters.[citation needed]

Arrogance: Esme has always been the most selfish of the Cuckoos. She was too focused on her own needs and desires regardless of who gets hurt or killed in the crossfire, including her family, causing even her own sisters to resent her which lead to her downfall.[20]

Like this? Let us know!
Retrieved from "https://marvel.fandom.com/wiki/Esme_Cuckoo_(Earth-616)?oldid=6513553"
Community content is available under CC-BY-SA unless otherwise noted.