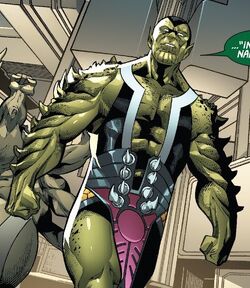 Over a billion years ago, the Celestials visited the Skrull homeworld of Skrullos and manipulated the Skrull species.[7] The Skrull Eternals were created and given both longevity and super powers.[8] They along with the Prime Skrulls were wiped out in a civil war by the Deviant Skrulls.[9]

The Eternal Kly'bn, the last survivor of his kind who was living in a stronghold in the Valley of the Esul, managed to convince his enemies that he was indispensable to the Skrull civilization. He formed the Skrull Pantheon and was later killed during the Secret Invasion.[2]

All known Eternals of Skrullos were killed using "science magic" and wish blessed lances to render their "Eternal heart inoperable to bear the correct name". Kly'bn himself was defeated by the spine of Atum the God-Eater which itself was used as a spear.[2]

Like this? Let us know!
Retrieved from "https://marvel.fandom.com/wiki/Eternal_Skrulls?oldid=6006717"
Community content is available under CC-BY-SA unless otherwise noted.