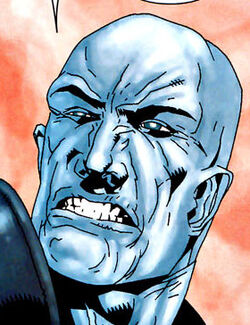 The Eternals were an alien species that was attacked by the Celestials. While half of their population was killed, including all of the women, the men were given eternal life of servitude to the Celestials.

They were forbidden to have females, families and children.

They became servants of the Celestials, for thousands of years visiting planets to turn their dominant fauna into Deviants or, in case of failure, replacing it by Deviants from another world.

On Earth, the Homo erectus, dominant species at the Dawn of Man, was turned as well, first appearing as a failure but quickly demonstrating a result closer to Eternals than to Deviants, by creating a female that was claimed by Kurassus as sex doll. Ikaeden agreed on creating others for Kurassus and all Eternals.

Using the Apple, Ikaeden was able to enhance the female comprehension, wanting to made her his intermediary and personal servant, rather than give her to Kurassus' perversions.

In three months, a vast population of Deviants was created, proving themselves to be the most efficient Deviants ever. Meanwhile, the Eternals used the female Deviants for sexual services.

Ikaeden was soon forced to push the Eternals off of their luxurious and libidinous ways.[1]

Five months after First Contact, a Pyramid was in construction. Some Deviant females were impregnated and dealt with, while the Eternals were now forbid by Ikaeden to procreate, save for Kurassus.

Eight months after First Contact, the Pyramid was finished, and Kurassus found Ikaeden's servant speaking with another Deviant, after she had used the Apple to learn to speak their language. Brought to Ikaeden for interrogation, the Deviant going now as "Jeska" was taken under his protection, and confessed her love.[1]

The Eternals were seemingly able to reproduce with other species, including at least the Earth Deviants (stated to be "artificial Eternals"),[2] with multiple reports of pregnancy.[3]

The Eternals are immortals, thanks to the Celestials.[1] They regenerate and cannot die except if the brain is destroyed.[4]

Even cut in half (but resewed), Kurassus could live.[5] Ikaeden recovered from a hole in his abdomen in moments.[6]

They seem to possess many powers, possibly from technology.

Like this? Let us know!
Retrieved from "https://marvel.fandom.com/wiki/Eternals_(Aliens)?oldid=6444578"
Community content is available under CC-BY-SA unless otherwise noted.