Marvel Database
Register
Don't have an account?
Sign In
Advertisement
in: Only Death Is Eternal, Comics, Eternals Vol 5,
and 198 more
English

View source
watch 01:32
She-Hulk Trailer Dropped - The Loop
Do you like this video?
Play Sound
Part of the Only Death Is Eternal arc

Many things are my fault, Ikaris. I am Eternal Prime. It is my job to have things be my fault. And it is YOUR job to DO THINGS.

Appearing in "Only Death Is Eternal, Part 1"

Synopsis for "Only Death Is Eternal, Part 1"

What’s the point of an eternal battle?

For millions of years, one hundred Eternals have roamed the Earth, secret protectors of humanity. Without them, we’d be smears between the teeth of the demon-like Deviants. Their war has waged for all time, echoing in our myths and nightmares. But today, Eternals face something new: change. Can they – or anyone on Earth – survive their discovery? 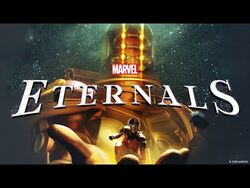