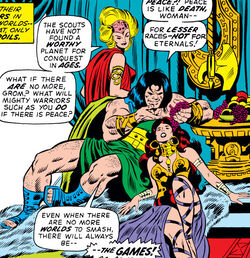 Millenia ago, the Celestials visited the planet Eyung, and manipulated its inhabitants, the Eyungs, into three branch: the Eternals, the Deviants and the Latents.[4]

The Eternals took control of the planet, enslaving or slaughtering their cousin races.[4]

Before the Solar system formed, they became technologically advanced at the point they could invade neighboring worlds.[4]

A society of science and technology, the Eternals mastered aging and natural death, and were consequently gifted with endless life.[2] To prevent overpopulation, the governments sanctioned interstellar warfare and conquest, in order to cull their own population.[4]

A merciless and cruel species, the Eternals rampaged on planets, slaughtering, destroying and enslaving.[4][2]

Undefeated, the Eternals were exposed to the spoils of victory,[2] and also grew bored.[4] They eventually turned their attention to gladiator games where they pitted their own warriors against beasts and slaves from the worlds they conquered. Their greatest champion was the mighty warrior known as Grom, "Champion of Champions".[2]

Soon after Grom's coronation,[4] the Eternals destroyed another inhabited planet, and became aware of its neighboring Gigantus, the pacific and life-lovers Gigantians who had remained hidden in fear, and sought to invade it.[2]

The war lasted for centuries.[4] First rampaging on the Gigantians, the Eternals were soon repelled, Gigantus proving far too massive[2] (several hundred times the size of Eyung)[4] and its population too dense to conquer and progressively more efficient for warfare.[2] Unable to sustain the cost of war[4] and fearing the time the tide would turn, they retreated while bombing the planet with reaction bombs, intending to annihilate it.[2]

In retaliation, the Gigantians assembled an armada to chase the Eternals, while their own planet was destroyed. The Gigantans attacked Eyung, putting the Eternals under attack for the first time of their history, and using reaction bombs as well. Overconfident[2] and unprepared, the Eternals' defenses fell.[4]

With their planet on the brink of destruction, the Eternals had the minds of their entire population transferred into the body of Grom, by entering "synthesizing chambers" scattered on the planet. Once all Eternals were converted, save for the scientists,[4] they then sent him into space in a state of suspended animation in order to avenge the destruction of his people by taking over the universe.[2][6][4]

Centuries later during the modern age, the Over-Mind was revived and began trying to accomplish the last request of his peoples, opposed by the Stranger who posed as the merger of all Gigantians[4][6] (the truth remains controversial).[7]

To date, the Over-Mind has failed in accomplishing his tasks, even trying to accomplish it on Earth-712 by conquering its Earth and then assembling an armada for interstellar warfare.[8]

The Eternals were allegedly gifted with fantastic fighting skills and mastering of science and technology.[2]

The Eternals were technologically and scientifically advanced:[2]

Like this? Let us know!
Retrieved from "https://marvel.fandom.com/wiki/Eternals_of_Eyung?oldid=5837779"
Community content is available under CC-BY-SA unless otherwise noted.