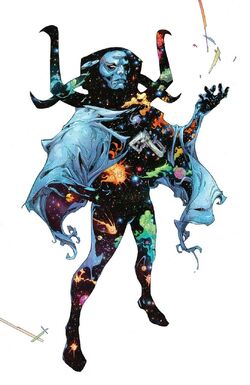 Every universe in the Multiverse manifests itself as an anthropomorphic being called Eternity.[6][7] Eternity is an abstract entity which embodies the Earth-616's reality along with his "sister counterpart", Infinity, with whom Eternity is one. Their authority on Earth-616 is only surpassed by the Living Tribunal.[8][9] Eternity is also the personification of time.[10]

Eternity, as the embodiment of Earth-616, was born as an offspring of the larger Multiversal Eternity in the seventh incarnation of the Multiverse.[11][12]

At one point, Eternity spawned several "children", or concepts that became separate, independent entities. These include Empathy, Eulogy, Expediency, Entropy, Epiphany, Enmity, and Eon - although the last was eventually killed and replaced in turn by the concept Epoch.[13][14]

Eternity typically only manifested when there was an imminent threat to the universe, such as the villain Dormammu or the Titan Thanos, who collected the Infinity Gems and later the Heart of the Universe. With these artifacts Thanos was, in fact, capable of surpassing Eternity and even imprisoned the cosmic entity, proving that even Eternity was not truly omnipotent.[15]

A notable exception was during the trial of Mr. Fantastic, when Eternity was summoned by the combined effort of Galactus and the Watcher. Eternity then allowed millions of alien onlookers to momentarily become one with the universe so that they could understand that Galactus was part of the natural order of the universe.[4] The Sorcerer Supreme Doctor Strange was the second human being on Earth to have contact with Eternity, the first being the Ancient One.[16]

Eternity and all of his counterparts across the Multiverse were guarded by their own personal Captain Universe.[17]

Eternity was the collective consciousness of all life and was, therefore, dependent on the many trillions of beings within it. It existed everywhere simultaneously. Eternity could take a humanoid form when it designed to communicate to sorcerers and the like. Eternity once aided Doctor Strange against Dormammu,[18] and Strange then helped Eternity escape from Nightmare's clutches.[19] He was captured by Nightmare once again, which led to the destruction of Earth, but after the intervention of Strange and the Ancient One, Eternity recreated the Earth.[20] To have greater understanding of humanity, Eternity occasionally walked the Earth, using the name Adam Quadmon.[1]

Meeting with the Scientist Supreme

When Henry Pym grew beyond the macroverse into Overspace, he met Eternity, who thanked him for saving reality from Chthon. He gave the title "Scientist Supreme" to Pym because of his desire to take science to the point of studying magic. He sent Pym back to Earth, telling him that he was the founder of the Avengers to come and promised a new age of heroes was coming, although this may have been a ruse by Loki.[21]

The End of Death

Thanos, in an effort to keep Deadpool away from his beloved Death, cursed him never to die. However, the embodiment of Death had also been kidnapped by Eternity, meaning nothing else in the universe could die either, causing untold chaos throughout the universe. When Deadpool, believing Thanos responsible, arrived on Thanos' ship to defeat him, Thanos rescinded his curse, turning Deadpool into the only mortal creature in the universe, then killed him.[22]

However, upon realizing that Death would only speak to Wade, Thanos resurrected him in order to save her.[22] When the pair managed to travel to Eternity's Realm and encounter him personally, Thanos attacked mercilessly, blaming Eternity for all of his life's ills. Wilson, realizing that this was what Death wanted all along, attacked Thanos and was possessed by the Uni-Power, giving Deadpool the powers of Captain Universe. Using those powers, Deadpool and Thanos fought on equal ground, but Deadpool's speech during the fight convinced Death of the validity of life's existence and caused Mistress Death to whisk Thanos away, for a later purpose and to return to her own, restoring mortality to the universe.[17]

The Eternity of Earth-616, as well as its alternate reality counterparts, was eventually annihilated by the Beyonders.[23] When the phenomena known as incursion led to the destruction of everything, Doctor Doom seized the power of the Beyonders and reshaped the remnants of several different realities into Battleworld.[24]

After the destruction of Doom's Battleworld, the Multiverse was rebuilt in its eighth iteration by Mister Fantastic, with Prime Earth (formerly known as Earth-616) as its center. As a consequence, the Multiversal Eternity and his offspring, including Earth-616's Eternity, were brought back to life.[25] Later, while the Multiversal Eternity was chained by the First Firmament in a plan to regain its control over reality,[26] the Eternity of Prime Earth was still able to manifest himself, unaffected by the Firmament.[27][28][29][30][31][32][33][34]

Nigh omnipotence. Unlimited ability to manipulate time, space, matter, energy, magic or reality for any purpose; Immortal embodiment of the universe; Capable of physically manifesting as any force living within the Earth dimension. Thanos, using the Infinity Gauntlet, ranked Eternity as standing above all abstract entities such as Master Order, Lord Chaos, Sire Hate, Mistress Love, and many other entities, being equal to Infinity and below Living Tribunal.[citation needed]

Like this? Let us know!
Retrieved from "https://marvel.fandom.com/wiki/Eternity_(Earth-616)?oldid=6449742"
Community content is available under CC-BY-SA unless otherwise noted.