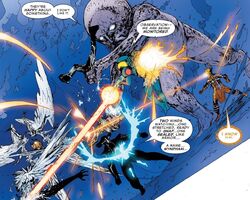 Aliases
The Inside versus the Outside,
The War for Everything That Is,
The War of Existence versus Oblivion[1]

In the beginning, there was only one universe: the First Firmament. A war between its creations, the Aspirants and the Celestials, shattered the First Firmament into pieces, and from these pieces were born countless universes, thus forming the Second Cosmos and first Multiverse. As these new universes coalesced, a new, collective being was formed. Each iteration of the Multiverse has gone through a different instance of renewal, which constitutes in the destruction and re-creation of everything there is starting from zero, with each renewal prompting the Multiverse to evolve further.[2][3]

The seventh iteration of the Multiverse was destroyed as a consequence of the phenomena known as incursions,[4] and was eventually reborn as the eighth when Mister Fantastic acquired the power of the Beyonders, which was previously held by Doctor Doom. Richards' intervention caused the eighth incarnation to be a direct continuation of the seventh. Instead of starting from scratch, most of the destroyed universes were re-created, continuing their existence almost as if nothing had happened.[5]

Still resentful by the existence of multiple realities, the First Firmament decided to attack the current embodiment of the Multiverse, Eternity. Taking advantage of Eternity's weakened state caused by its most recent rebirth, the First Firmament bound it in chains, and sent its Aspirants to destroy it from the inside out.[3]

In an attempt to help strenghten Eternity, the Maker harvested the essence of the Aspirants and used the High Evolutionary's technology to disrupt and bring down the Superflow, the network that separated realities from one another, successfully merging every universe within Eternity into one. The Maker also took advantage of this opportunity to rewrite the laws of the Multiverse to bring back to life the original Ultimates from his defunct home universe.[6] Even though the process strengthened Eternity in the beginning and allowed it to break free from the First Firmament's grasp, it soon proved to be counterproductive. Eternity began to deteriorate, facilitating the First Firmament's consumption of it. Because of this, Galactus sent his own Ultimates to stop the Maker.

After Spectrum and the High Evolutionary killed the Maker's then-current body, both teams of Ultimates worked together to reverse the damage caused to the Superflow. Using the nanites from his armor in the High Evolutionary's technology, which had been advanced by the Maker beyond its creator's understanding, Iron Man was capable of interacting with it. Spectrum subsequently used her powers to link together the minds of both teams of Ultimates, allowing their combined brain power to operate the machine, and restore the Multiverse to its normal state.

Galactus and his Eternity Watch subsequently entered Eternity and defeated the Aspirants, freeing Eternity from their detrimental influence. Full of vigor once again, Eternity managed to confront the First Firmament, summoning the previous embodiments of past cosmoses to his aid. This army of past cosmoses imprisoned the First Firmament, and took it away to another plane of existence in order to heal it.[7]

Retrieved from "https://marvel.fandom.com/wiki/Eternity_War?oldid=5311523"
Community content is available under CC-BY-SA unless otherwise noted.