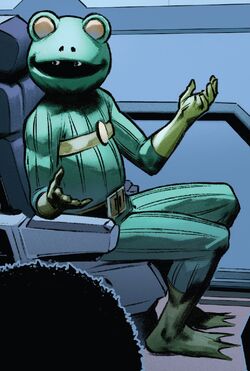 There's only one way dad's gonna be rid of the Leap Frog's ghost-- and that's if someone uses that name to create a powerful symbol for good! And that someone's gonna be me!

Eugene Paul Patilio's father, Vincent Patilio, was an inventor who had never created anything successful. Vincent eventually devised electrically-powered coils that he then fashioned into a costume. Vincent embarked on an ill-fated career as the villainous Leap-Frog. He ended up in prison. [2] Eugene's mother Rosie Patilio was the breadwinner in the family and her salary had kept them afloat financially. But then Rosie died of cancer. [2]

In need of financially supporting his family, Vincent got a job. He sold inferior merchandise on the East Side of Manhattan. The earnings were barely enough to pay the rent for their home. He could not afford anything else. His teenager son Eugene was still in school, but had to get his own job to help support the family. Eugene worked his tail off after school, and had less time for studying.[2]

Eugene searched through a hall closet and discovered Leap-Frog's Suit. Eugene took the suit to his own bedroom, then started wearing it. He believed that there was only one way for his father to stop being haunted by the ghost of Leap-Frog. And this way was for someone else to take over the identity and use it as a powerful symbol for good. He felt this mission belonged to him. Wearing the costume, Eugene became a new Leap-Frog and declared that there was a new super hero in town.[2]

Eugene began an earnest, if somewhat clumsy, battle against crime. In attempting to help Spider-Man and the Human Torch, Eugene accidentally succeeded in defeating the criminal Speed Demon. Greatly encouraged by this victory, Patilio named himself "the Fabulous Frog-Man." [2]

Vincent was proud of his son for capturing the Speed Demon, but his pride turned to disapproval as Eugene continued to serve as a superhero. Patilio assisted, of sorts, Captain America, and later tried unsuccessfully to join the super team Defenders. Afterward, Patilio was encouraged by Spider-Man to join with the Toad and Spider-Kid in forming the Misfits, although they disbanded almost immediately afterward. Later, Patilio defeated the villain White Rabbit with the help of his father, who had donned a version of the Leap Frog costume again.

Frog-Man was soon captured by Alyosha Kravinoff and used like an ordinary animal, for Kraven's hunting pleasure. He was held on a boat with other animal-themed super-criminals, such as Rhino, Vulture, the second Kangaroo, Swarm and others. Kraven would drug them and fight them to prove his superiority. He was stopped by the Punisher, but Kraven got away.

After the Civil War, he was listed as a potential recruit for the Initiative,[3] and was recruited into the Action Pack team.[4] During the Secret Invasion, this Patilio was revealed to be a Skull infiltrator and after the invasion was over, the real Frog-Man joined a support group meeting for people who had been replaced by Skrulls.[5]

During Spider-Island, Frog-Man helped The Avengers to defeat Flag-Smasher and U.L.T.I.M.A.T.U.M., who were attacking the U.N. at the moment. He wished to establish a partnership with Ms. Marvel. As usual, through sheer luck, Frog-Man helped the team win the battle and save the day.[6]

At some point in time, Eugene started working as a busboy at Isaac's Oysters, a restaurant in Greenwich Village run by retired vigilante Gargoyle.[7] After the android Korvac resurfaced and embarked in a plan to regain his godgood, he came to blows with Iron Man and Hellcat.[8] When Stark saw himself forced to recruit allies under Korvac's radar, Frog-Man was one of the heroes suggested by Hellcat.[9] Alongside Gargoyle, Frog-Man became part of the ragtag group of heroes,[7] which joined Iron Man as he pursued Korvac into outer space.[10]

Like this? Let us know!
Retrieved from "https://marvel.fandom.com/wiki/Eugene_Patilio_(Earth-616)?oldid=6481077"
Community content is available under CC-BY-SA unless otherwise noted.