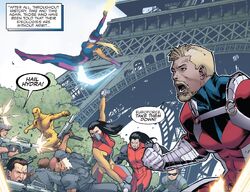 The Euroforce is a team of European superheroes and a merger of scientific investigations team called EuroLab and the military unit codenamed Task Force.[1]

Euroforce later came under the leadership of Black Knight.[2]

When Captain America established a Hydra Empire in the United States of America, Hydra splinter groups started to form all over the world and several superhero teams, such as the Euroforce, were gathered to stop Hydra from going any further.[3] During one of their attacks, most of the team ended up in prison, but they were all freed by the Champions of Europe later.[4]

Like this? Let us know!
Retrieved from "https://marvel.fandom.com/wiki/Euroforce_(Earth-616)?oldid=6079847"
Community content is available under CC-BY-SA unless otherwise noted.